Starting in late April, copper prices began to take out prior lows. It seemed like an attempt to find a bottom and reestablish a potential bullish reversal in the short term. 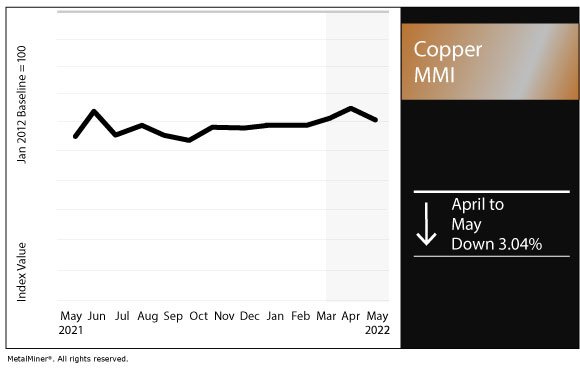 Know what to do when the trend shifts. Related article: The Art of Timing Your Metal Buy

Shanghai Remains Under Lockdown, Beijing on the Brink

Despite declining case counts, Shanghai remains under a lockdown that has continued for more than a month. Since April 22, cases within the city have remained within a “continuous downward trend,” according to the city’s vice major Wu Qing. The optimistic data could indicate that the lifting of restrictions may be around the corner.

However, Qing also cautioned that while “the epidemic has come under effective control,” the city will continue to chase China’s ongoing zero-COVID strategy. Undeterred by the larger economic impacts, Qing stated at a separate meeting, “we cannot relax, we cannot slack off: persistence is victory.”

On the other hand, Beijing’s COVID case counts continue to rise. Thus far, the capital city has managed to circumvent sweeping lockdowns like those seen in Shanghai. This is likely due to strict mitigation efforts involving closing subways, public venues, and some residential buildings

The lastest reports indicate that the current outbreak’s spread through Beijing remains slower than what was seen during the same period in Shanghai. However, rising case counts nonetheless veer ever further from China’s broad zero-COVID standard. As the virus spreads, the possibility of more extensive restrictions (and of continued economic ramifications) increases. 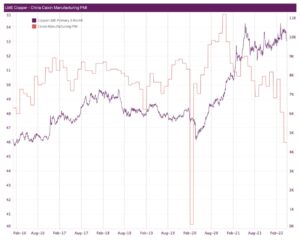 The impacts of China’s zero-COVID approach saw the Caixin Manufacturing PMI plummet to a 2-year low in April. In fact, it fell at the steepest rate since the initial onset of the pandemic in 2020. All in all, the index contracted to 46 from 48.1 in March.

As factory activity contracted, so too did China’s demand for metals. According to data released in April by the General Administration of Customs, copper imports dropped 8.8% from February to March. This trend is expected to continue through May, with little changing thus far in the way of lockdowns.

The Caixin Manufacturing PMI stands as a leading indicator of Chinese economic strength. Historically, copper prices have loosely mirrored its larger trends. The most recent decline in LME copper prices appears, at least to some extent, reflective of the most recent contraction.

China is the largest producer and importer of copper in the world. As such, the state of its economic activity has larger implications for the world’s metal markets. The recent market softness created by muted Chinese demand will likely persist until their economy emerges from lockdowns, which has yet to happen. Should the Caixin Manufacturing PMI hold as a leading indicator, copper prices will likely continue to mirror China’s manufacturing activity.

In the short term, as has happened with each wave and variant of COVID, China’s cities will eventually recover from the current outbreaks. There will, of course, likely be more. It remains to be seen what will shake China’s resolve about its current COVID mitigation strategy and when this might happen. Around the world, China remains the last major holdout in an economically restrictive approach to the virus.

In the medium term, the 20th National Congress of the CCP will occur in the fall, most likely November. As the congress is filled with Xi proteges, President Xi’s reelection appears, at this point, to be the most foreseeable outcome. However, Xi would not be the first politician to shift his policies once he secures an additional term. That being said, there is no indication that Xi will adopt a new approach to the virus at any point.