Amongst a plethora of news, comment and opinion, it is often like struggling through a jungle when trying to get clarity on the commodities landscape. Sometimes, there is almost too much information.

So, an analysis in the Financial Times entitled “Five things to watch as Brent crude oil nears $70” makes a refreshingly simplified but no less comprehensive summary of the key issues currently driving the oil price. 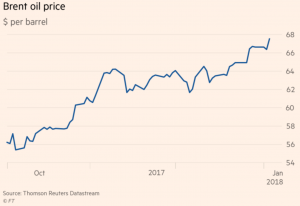 The crude oil price rise has been relentlessly rising for the last 3-4 months and while plenty of opinion has been espoused — in these columns too, I should add — about the moderating effect of U.S. shale oil on global supply (and hence, prices), the reality is so far the impact has been minimal. Prices have continued to show stubborn resistance to any such moderation.

Iran has certainly been a factor. Opinions differ as to how much impact unrest in the region has contributed to price rises. However, as the third-largest oil producer in OPEC, contributing to some 4% of global supply, civil unrest was a reminder that nothing can be taken for granted.

In practice, protests had no impact on oil output. The street protests have now subsided, but Iran remains a source of tension in the region, with an antagonistic stance towards Saudi Arabia with respect to its military intervention in Yemen providing the potential for a flare-up. Oil output in the region generally has suffered some setbacks, with output in Kurdistan dropping after Baghdad took back control of disputed oilfields in October.

Output elsewhere has remained restrained in those countries participating in the Saudi-Russian led coalition to reduce inventories, but question marks remain as to how well they will stick to the deal as the oil price remains firm in 2018. Many may believe the heavy lifting is done and treasuries now deserve replenishing.

Not so fortunate to have a choice is Venezuela, which is quietly imploding.

State oil company PDVSA, once a paradigm of professionalism when run in association with operations in the Hague, is now bankrupt and oil output is the lowest in nearly 30 years. The remaining 1.9 million barrels per day of output is the single largest supply- side risk to oil in 2018, the Financial Times notes.

While on supply side, oil consumers’ white knight has been the U.S. shale industry, where the U.S. Energy Information Administration is forecasting U.S. shale output to increase by 780,000 b/d in 2018 — more than double the 380,000 b/d it expanded by last year, the Financial Times reports. This could increase further as frackers hedge at an increasingly attractive near $70/barrel price.

Meanwhile, large-scale conventional projects commissioned before the crash are also due to come onstream in Brazil and Canada this year, boosting total supply from outside OPEC by about 1.6 million b/d in 2018, according to the Financial Times.

This brings us back to the question: why has the price continued to rise when the expectation is shale oil and conventional projects promise to bring on new supply?

OPEC’s cuts are not enough in themselves to balance the books in the face of such supply-side optimism. The answer to the question is demand has been the unsung hero of the day for the oil industry.

Consumption has expanded by 5 million b/d between the start of 2015 and the end of 2017. In part, this has been due to lower prices, but widespread global GDP growth has probably had a greater impact, with both emerging markets and mature markets showing broad-based solid growth and no major economies in recession for the first time since the financial crisis.

Inevitably, as with all commodities, no review would be complete without looking at the role investors or speculators have played.

Hedge funds are said to have amassed record bullish long positions in oil equivalent to 1 billion barrels across Brent and U.S. West Texas markets undoubtedly supporting prices in the process. If they were to decide to take profits, a sharp correction could ensue; in the current bullish atmosphere, that appears relatively unlikely.