Home | Company News | Steelmakers Are Performing Strongly … But How Long Will That Last?
Commentary, Market Analysis

Steelmakers Are Performing Strongly … But How Long Will That Last?

Steelmakers’ fortunes are up, and for that we should all rejoice; an industry fighting bankruptcy or suffering long-running losses is not an industry that invests in its products or services.

But questions remain about how long the current run of good fortune will continue for Western steelmakers. 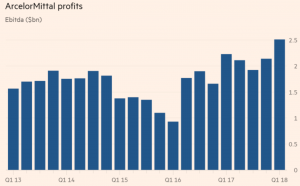 On the plus side ArcelorMittal has just posted its best quarter since 2011 with EBITDA quarterly core profits rising 17% year on year to $2.5 billion for the January-March period.

Analysts quoted in the Financial Times put the recovery down to rounds of cost-cutting and efficiency instigated after the downturn of 2015-16. Rising global GDP and, hence, demand has built on these improvements to raise prices for steelmakers and, in particular, the delta between raw material costs and finished steel prices, lifting profitability to the highest in a decade. 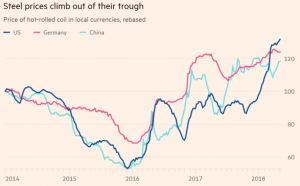 ThyssenKrupp of Germany posted a tripling of half-year earnings on the back of better sales prices and reduced losses, having offloaded its South American slab mill to Siderúrgica do Atlântico (CSA) and its Calvert, Alabama carbon and stainless mills to ArcelorMittal/Nippon Steel and Outokumpo, respectively.

Some would argue it got out at the bottom of the market and would have lost less if it had held on for a better price when the market turned, but both plants were making losses and ThyssenKrupp was under pressure from shareholders to turn the group around.

ThyssenKrupp is not alone — many steel mills have demerged, shuttered, divested or otherwise re-structured in order to focus on their more profitable opportunities in recent years and are reaping the benefits.

However, the extent to which this happy state of affairs can continue lies, at least in part, in China.

As the Financial Times points out, a combination of industrial reform in China and positive profit margins has lifted steelmakers’ focus on the domestic market and reduced exports. From a peak of 110 million tons in 2015, China’s steel exports have shrunk by one-third to 73.3 million tons in 2017. The Financial Times credits this restriction of supply as helping restore a sense of balance to the steel market, which is reflected in regional price rises in Europe and North America.

There remains dispute about the depth and speed of the steel market restructuring program in China, but even if it is not as radical as the authorities claim it has contributed to sentiment and supported prices. The questions the Financial Times poses is thus: how long will this new balance last and, with prices falling in China, will exports rise later this year?

An indication of European concern is a new registration program started just this month that requires importers to register all incoming shipments by origin, value and tariff code.

At present, there is no requirement for a license or any cases of approval not being given, but many see it as a first step to Brussels more closely monitoring steel (and aluminum) imports from China, Russia, etc., with a view to introducing quotas or tariffs if volumes rise.

For once, Brussels can be said to be ahead of the game.