China could be said to be making hay while the sun shines.

But suggestions that this is the start of a flood may be premature.

The Impact of U.S. Tariffs

Exports to the U.S. will be cramped by the U.S. administration’s 10% general import tax on aluminum products and ban on foil.

U.S. import tariffs will also hit suppliers in the Americas and Europe, probably limiting their exports to the U.S. — at least in the short term — and making any increase in Chinese sales of metal into Europe even less welcome than it has previously been.

The E.U. has rushed in an import licensing scheme to monitor imports, in part designed to track where rising volumes of steel and aluminum imports are coming from so that future action can be targeted. 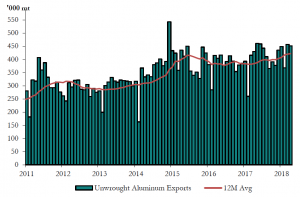 China’s recent success in increasing exports is probably more akin to Europe’s recent rise in exports as U.S. consumers stock up on material ahead of the application of tariffs. The expectation in Europe is sales will drop off sharply over the summer as U.S. consumers absorb these pre-purchases and wait to see what impact the tariffs have.

An initial expectation that supply disruptions were going to be short-lived have been replaced by the growing realization that Rusal have only been given a stay of execution until October. Rusal owner Oleg Deripaska’s assurances he would park his shares in En+, Rusal’s holding company, into a blind trust are hardly the severance U.S. authorities are looking for, and are unlikely to achieve a rollback on the sanctions being applied to Rusal.

Unless further action is taken soon, it is likely the aluminum market outside of China will tighten further, as consumers currently taking in Rusal alumina and primary metal slow purchases in fear they will be left with stock by the October deadline.

That alone is going to be the main driver of Chinese aluminum exports if European producers are priced out of their own markets by high LME prices and outcompeted by Chinese producers accessing plentiful domestic primary metal.

The divergence between the LME and SHFE will be the decider in coming months and could spell trouble for producers in Europe, which are already struggling to secure raw material and being out-priced by Chinese imports.