by Irene Martinez Canorea on January 8, 2019 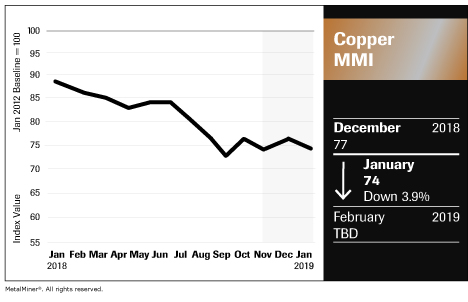 Similar to other base metals, LME copper prices fell in December. LME copper prices fell below the $6,000/mt level, which served as a stiff resistance level for most of 2017. Prices over this level indicate a bullish copper market, while prices below that level signal a more bearish trend. This level has represented a psychological signal for “Doctor Copper” since 2017.

So far in January, LME copper prices have increased. However, current levels remain below that $6,000/mt psychological ceiling. Trading volume also appears weaker, which does not support a sharp uptrend.

Anglo American announced that overall production will increase more than expected between 2018-2021. Forecasts suggest 2018 production increased by 2%, driven by increases in copper output. 2019 production could increase by another 3%, and 2020-2021 production by an additional 5%.

Despite this forecast by Anglo American, the International Copper Study Group (ICSG) announced a wider deficit in September. The global refined copper deficit increased to 168,000 tons in September from the previous 43,000 tons in August. For the first nine months of 2018, the market saw a 595,000-ton deficit versus the previous year’s deficit of 226,000 tons.

The spread has become smaller this month. The wider the spread, the higher the copper scrap consumption, and therefore, the price.

LME copper prices fell this month, moving below the $6,000/mt level. Buying organizations will want to understand how to react to the latest copper price movements. Adapting the “right” buying strategy becomes crucial to reduce risks. Only MetalMiner’s Monthly Outlook reports provide a continuously updated snapshot of the market from which buying organizations can determine when and how much of the underlying metal to buy.

Click here for more info on how to mitigate price risk all year round — and get a free 2-month trial to our Monthly Metal Buying Outlook.