Late last week, a CMO of a B2B mobile technology company published a lightly scathing take on the mainstream media’s characterization of the current “trade war” (a “farce,” according to the headline), by making the case for, among other things, reshoring.
Need buying strategies for steel? Request your two-month free trial of MetalMiner’s Outlook
Ostensibly reporting from the World Economic Forum in Davos, Switzerland, where representatives from participating countries such as Vietnam are worried about high-skilled manufacturing jobs skipping over them en route from China back to the Western world, the author writes that “we’ve really missed the point giving the trade war so many column inches.”
“While the cost of aluminum may sting now if you are importing,” he writes, “it’s an effect of the death throes of a model of production from the end of the last century,” going on to conclude that the future will belong to manufacturers who reshore their operations.
The article cites stats coming from the Reshoring Initiative, a firm that we at MetalMiner have had on our radar since roughly near the end of the Great Recession, and whose founder has been a key source for us in keeping our finger on the pulse of reshoring trends over the last several years.
That founder, Harry Moser, joins us as the first guest in conversation with Lisa Reisman on our new podcast series, “The Maker-to-User Trend in the Time of Tariffs.”

Maker-to-User in the Time of Tariffs: Background

After the U.S. Commerce Department’s Section 232 findings in early 2018, President Trump took action — and the rest is history.
This new podcast series takes a closer look at the U.S. manufacturing landscape in our present time of trade tariffs, and how manufacturers themselves are affected by the tariffs (winners and losers).
For example, just over 90% of manufacturing industry respondents in a recent, informal MetalMiner poll indicated that the Trump tariffs have hurt their respective businesses, via increased material costs, inventory woes and longer lead times, among other effects.
However, other manufacturers — for example, Honda — have posted healthy profits over the last year.
Want to a see Cold Rolled price forecast? Get two monthly reports for free!
Ultimately, we’re interested in what all of this means for the “maker-to-user” trend that we’ve seen gain steam the past several years. 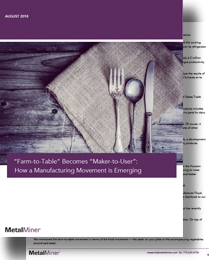 For an excellent primer on the “maker-to-user” movement and trends, download our free white paper on the topic here.
Listen to more episodes and follow the MetalMiner Podcast here.