The Automotive Monthly Metals Index (MMI) held flat this month, sticking at a reading of 92. 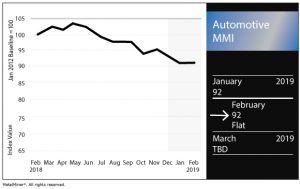 As for the automaker’s electric Chevrolet Bolt, it increased production of the EV in the fourth quarter, and says it projects increased demand for the Bolt in GM’s major markets this year.

In personnel news, GM announced that a new round of layoffs has begun, with 4,000 set to lose their jobs (as part of a 15% workforce reduction announced late last year).

Ford Motor Co., meanwhile, bounced back in January after sales dropped 8.8% year over year in December. Ford recently announced that, like GM, it will not report sales on a monthly basis (instead moving to a quarterly schedule). However, according to Bloomberg, Ford’s January sales increased 7% year over year.

“In spite of some frigid January weather, we remain bullish on 2019 given the continued underlying strength of the US economy,” Fiat Chrysler’s U.S. Head of Sales Reid Bigland said in a release. “We expect a good cadence of new product throughout the year led by our Ram heavy-duty pickup trucks and Jeep® Gladiator midsize truck in the first half of this year.”

Revisiting last month’s article on the subject, Tesla CEO Elon Musk last month announced the company would be slashing approximately 7% of its workforce as it looks to bring down the price tag for its electric vehicles.

“Attempting to build affordable clean energy products at scale necessarily requires extreme effort and relentless creativity, but succeeding in our mission is essential to ensure that the future is good, so we must do everything we can to advance the cause,” Musk wrote in a letter to staff published on Tesla’s website.