One Time-Tested Economic Indicator Points to Possibility of Recession

Readers of The Telegraph are somewhat inured to dire warnings from the paper’s International Business Editor Ambrose Evans-Pritchard. However, his articles are well-researched and in the case of a piece this week, well balanced with arguments for and against his central theme that the bond market, supported by wider data, is showing sufficient warning signs regarding a recession that we should take the prospect seriously.

The piece isn’t alone in calling out the inversion of the U.S. bond market as a warning sign.

Simply put, the yield on 10-year U.S. Treasuries slipping below shorter-dated maturities tends to be a reliable indicator that a contraction is coming.

As this graph from The Telegraph, illustrates the yield curve has proved a remarkably accurate predictor of America’s post-war recessions.

This is the first time that the curve has turned negative since 2007, just ahead of the last financial crisis. In an earlier post, Evans-Prichard explains that inversions actually mean something important — that bond investors think interest rates are going to be lower in the future than they are now.

If the yield curve were to shortly switch back into positive territory, it may be treated as an anomaly.

Meanwhile, 10-year German Bund yields recently crashed below zero after a gauge of manufacturing orders dropped to what the article terms slump levels of 40.7 (last seen in 2009). It could be a negative return on 10-year German Bunds is making higher-yielding U.S. Treasuries seem an attractive alternative and, in the process, distorting the market.

Other indicators, however, suggest this could be part of a wider malaise. 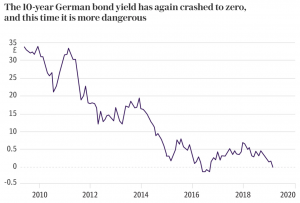 Trade war or not, the Chinese economy is in the grip of a long-term cyclical and structural slowdown.

Recent fiscal stimulus from tax cuts and spending could add about 1%, to GDP but this is a far cry from the stimulus of 4% in 2015-16 and 10% of GDP a decade ago following the financial crisis.

China isn’t going to ride to the rescue this time. The article quotes Capital Economic’s proxy measures of the Chinese economy, suggesting real growth is closer to 4.0-4.5% this year. Even with the uplift in sentiment that a settlement to the trade dispute between the U.S. and China may bring, it is unlikely this will result in a strong resurgence in global growth.

Europe, in particular, has no room for stimulus with the European Central Bank stopping quantitative easing last year and negative interest rates still prevailing in some economies. Heavily indebted states, like Italy, are said to be into the third quarter of recession just as bank credit is becoming constrained.

Despite some of the dire data, Evans-Prichard is not predicting an outright recession, but rather a period of stagnation during next year. His view is predicated on the expectation that the U.S. should continue with positive — if slowing — growth and that emerging-market growth may be sufficient to offset the slowdown in Europe.

Nevertheless, he cautions a close watch on that inverted yield curve; if it perseveres, it could be a harbinger of worse to come.