What a difference a month makes in commodity markets.

Just a month back, we reviewed the delicate balance OPEC was facing in trying to drive prices higher without having to make further cuts in output.

But now the U.S. seems to be coming to OPEC’s aid.

The market was finely balanced after a loss of output from Libya, where a civil war is raging, and Venezuela, where state bankruptcy and U.S. sanctions have put output into what appears to be, if not terminal decline, then a fall that could take many years of investment before it can recover.

The Financial Times and the Times both reported this week that moves by the Trump administration to remove waivers previously granted to key oil-consuming countries has taken the market by surprise. The news caused oil prices to spike in anticipation of the market being deprived of Iranian production.

Japan, South Korea, Turkey, India and China will, according to the Financial Times, face pressure to cancel Iranian oil imports as the U.S. seeks to increase pressure on Tehran over what it sees as its role in state-sponsored regional terrorism. 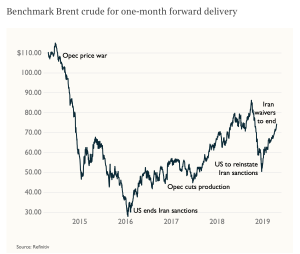 The oil price has already risen sharply this year. Brent crude climbed 2.6% on Monday to $73.80 a barrel, after hitting a high of $74.31 in early Asia trading following the announcement by a U.S. official. West Texas Intermediate, the U.S. marker, rose as much as 1.2% to a high of $64.74, the highest intraday level in two weeks, the Financial Times reported.

According to the Financial Times, the U.S. hopes its traditional oil-producing allies will raise output to offset further falls in Iranian supply — as they did last year — but this decision is not without complications.

Saudi Arabia and OPEC are in conflict with the U.S. in wanting higher oil prices and a balanced market, yet the U.S. is making no efforts to restrict its own shale oil output, expecting OPEC to raise or lower its supply to keep prices stable.

The latest forecasts from major agencies, including OPEC and the U.S. Energy Information Administration, see the market in a deficit of up to 500,000 barrels a day this year, before more supplies from Iran — and possibly Venezuela and Libya — are lost, the Financial Times reports.

A tighter oil market will increase gasoline prices, contrary to a campaign pledge from the president to lower them. The U.S. still imports at least one-third of its oil supply and remains exposed to global oil prices, despite being the largest producer in the world this year.

It would appear prices could rise further as the removal of waivers begins to bite and major consumers switch to other supply sources. Despite slower global growth, energy and transport costs look set to continue to rise. (We will be covering a development in marine transport next week that predicts higher container rates in 2019-20 and suggests supply chain managers should be factoring in higher costs later this year and next.)