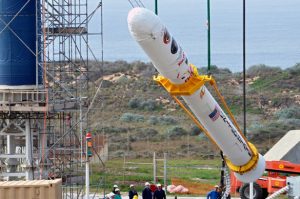 On Space Launch Complex 576-E at Vandenberg Air Force Base in California, Orbital Sciences workers monitor NASA’s Glory upper stack as a crane lifts it from a stationary rail for attachment to the Taurus XL rocket’s Stage 0.
Source: NASA

Following investigations regarding the cause of two launch failures in 2009 and 2011, NASA pointed the finger this week on faulty materials from aluminum manufacturer Sapa Profiles, Inc. (SPI).

“LSP’s technical investigation led to the involvement of NASA’s Office of the Inspector General and the U.S. Department of Justice (DOJ). DOJ’s efforts, recently made public, resulted in the resolution of criminal charges and alleged civil claims against SPI, and its agreement to pay $46 million to the U.S. government and other commercial customers. This relates to a 19-year scheme that included falsifying thousands of certifications for aluminum extrusions to hundreds of customers.”

According to NASA, the failed Taurus XL missions resulted in a loss of more than $700 million and “years of people’s scientific work.”

Upon investigation, NASA concluded the crafts’ launch vehicle fairing, a “clamshell structure that encapsulates the satellite as it travels through the atmosphere,” had failed to separate on command.

“From NASA’s investigation, it is now known that SPI altered test results and provided false certifications to Orbital Sciences Corporation, the manufacturer of the Taurus XL, regarding the aluminum extrusions used in the payload fairing rail frangible joint,” NASA said. “A frangible joint is a structural separation system that is initiated using ordnance.”

SPI, now known as Hydro Extrusion Portland, Inc., recently pleaded guilty to one count of mail fraud and reached a settlement with the Department of Justice’s Civil Division to pay $46.9 million.

SPI is owned in a 50-50 share purchase agreement between Norwegian conglomerate Orkla ASA and Norsk Hydro, after Hydro acquired a 50% interest in SPI in 2017 for NOK 27 billion.

“As part of the share purchase agreement between Hydro and Orkla ASA, Orkla ASA will indemnify Hydro for 50 percent of the liability in relation to the DOJ’s investigations,” Norsk Hydro said in a release April 23. “As communicated in Hydro’s 2018 Annual Report on March 15, 2019, a charge of NOK 157 million has been included in Hydro’s Q4 2018 figures related to the agreement with DOJ.”

PREVIOUS POST:
Podcast Ep. 6: How One of the Largest U.S. Truck Manufacturers Mitigates Tariff Risk — and Plans for 2020
NEXT POST:
This Morning in Metals: U.S. Steel to Invest More Than $1B at Pennsylvania Plants