The Construction Monthly Metals Index (MMI) gained one point for a May reading of 84.
Need buying strategies for steel? Request your two-month free trial of MetalMiner’s Outlook 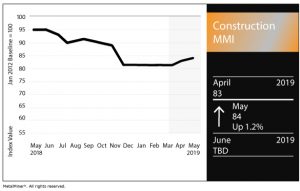 According to the monthly Architecture Billings Index (ABI) put out by the American Institute of Architects, March proved to be a down month for billings growth.
The March ABI value was 47.8, down from 50.3 the previous month (anything above 50 indicates growth, while anything below 50 indicates contraction). Per the report, billings declined for the first time in over two years.
“While this score may raise concerns about the start of a period of weaker business conditions, it is important to note that it does follow on the heels of a particularly tough late winter period for much of the country, with record-setting cold, storms, and floods,” an AIA release on the report states. “In addition, many indicators of future work at firms remain positive, with both inquiries into new work and the value of new design contracts continuing to grow, although the pace of growth of design contracts has slowed in recent months. Backlogs of work at architecture firms also rose to a new high of 6.5 months in March, up from 6.3 months one year ago.”
The South was the only region out of the four tracked in the ABI to show billings growth, posting an ABI value of 54.2. The Midwest (48.7), West (47.2) and Northeast (43.5) all came in at sub-50 values.
MetalMiner’s Annual Outlook provides 2019 buying strategies for carbon steel