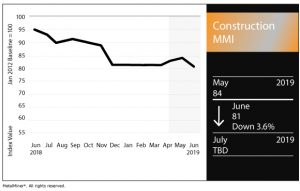 Private construction spending came in at a seasonally adjusted annual rate of $954.0 billion, down 1.7% from the revised March estimate of $970.4 billion.

This month’s Architecture Billings Index (ABI), released monthly by the American Institute of Architects (AIA), shows billings bounced back in April after a down March.

The April ABI checked in at 50.5, up from 47.8 the previous month, when billings declined for the first time in over two years. An ABI value greater than 50 indicates billings growth.

“However, while this turnaround is welcome news, billings growth generally remains sluggish, with only a slightly larger share of firms reporting increasing firm billings than reporting decreasing billings,” the AIA said. “But inquiries into new projects and the value of new signed design contracts both strengthened in April, as firms remain fairly optimistic about future work.”

With an ABI value of 51.6, the South was the only region to post billings growth in April; the West, Midwest and Northeast all posted sub-50 values.

This month’s ABI survey asked company leaders about their clients’ reaction to economic uncertainty (particularly on the heels of the March billings slide).

The responses indicate anxiety over said uncertainty is not insignificant, as 52% of respondents said “nervousness about the economic outlook was affecting their clients either modestly, seriously, or a great deal.” Furthermore, of the firms reporting at least moderate nervousness regarding the economic outlook, 62% said their clients have reacted by slowing or stalling projects.

Even in this age of political polarization, infrastructure is an issue that draws broad support, regardless of political affiliation. After all, who doesn’t want safe roads and bridges?

However, general sentiment doesn’t always translate into action, particularly when passed through the filter of politics.

The USMCA, which would succeed the 1994 North American Free Trade Agreement (NAFTA), must be ratified by the legislatures of Canada, Mexico and the U.S. before it can go into effect.

Trump last month lifted the Section 232 steel and aluminum tariffs on imports of the metals from Mexico and Canada, but a recent threat to impose a 5% tariff on all imports from Mexico beginning June 10 has ramped up tensions.