Environmentalists are horrified by the impact of global warming on the Greenland ice sheet.

According to the Financial Times, temperatures have risen more than twice as fast in Greenland as the rest of the planet because the Arctic sea ice is retreating and pollution is darkening the arctic ice, reducing its ability to reflect sunlight.

Greenland is blanketed in an ice sheet about a mile deep that covers 81% of its land area — four times the size of California, the Financial Times reported.

The environmental impact of a melting Greenland ice is not the topic today for a MetalMiner article, however significant implications will be for low-lying areas such as Florida and Bangladesh.

They say every cloud has a silver lining. For Greenland, as the ice retreats and the land is exposed, the vast island’s natural resources hold the potential for significant new sources of minerals and hydrocarbons (albeit from an environment that still holds considerable challenges).

President Donald Trump’s interest in Greenland was not misplaced, merely the approach he used.

A recent report by the Brookings Institution explores both the opportunities and challenges in exploiting an area rich in iron ore, lead, zinc, diamonds, uranium, oil and, crucially, rare earth minerals.

The population’s decision to support autonomous self-rule government in June 2009 was based in part on the belief that the country could move beyond fishing and tourism to generate enough GDP to replace the financial support of Denmark.

That such an assessment was made at a time of sky-high commodity prices is now history. Since then, both mineral and oil prices have halved; what appeared to be a potentially economically viable opportunity in 2008 seems not so viable today. 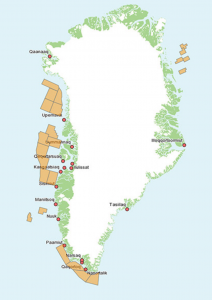 As the map from the Brookings Institute shows, there are significant potential reserves of oil and gas offshore. Nonetheless, despite the shortening winter season, the technical challenges of operating offshore oil rigs in such a hostile arctic environment make exploitation in the short-term economically unviable.

Quantifying Greenland’s mineral resource potential is still so sketchy that the U.S. Geological Survey (USGS) still consolidates Greenland’s results with Denmark’s, but the country already has a successful gold mine in Nalunaq and a ruby mine opened in 2015.

As some 80% of the landmass is still covered in ice, there is of course a vast area still unsurveyed, but the most attractive resource, from a strategic perspective, is undoubtedly rare earths.

It is no secret — and the cause of considerable anxiety in Western boardrooms — that China dominates the global production of these rare earths. More than 70% of rare earths are mined, and an even higher percentage processed, in China.

Beijing has used the threat of cutting off or restricting supplies in recent standoffs with Japan and clearly would not be above doing the same with the U.S. or Europe.

Two companies are already active in Greenland. One, Greenland Minerals, with extensive Chinese involvement, is making some progress. The other, Tambreez, a privately held Australian miner, has had its license application bogged down for years in bureaucratic delays but remains optimistic it has a viable resource (free of the contaminants so often found in Chinese deposits).

The Chinese have shown themselves willing to play the long game, investing now for a return much further down the road or for the sake of strategic positioning (as opposed to purely economic calculation).

The U.S. has signed a memorandum to cooperate with Greenland on rare earth mining. However, the U.S. is playing catch-up and probably needs deeper government pockets than those available to U.S. rare earth miners, who have struggled to make a success out of U.S. resources in much more benign locations.