For once, President Donald Trump should be pleased with the World Trade Organization (WTO), a body he has repeatedly criticized and actively worked to undermine by preventing the appointment of new judges to its appeals panel.

On Oct. 2, the WTO ruled in the U.S.’s favor, agreeing to the largest tariff penalty in its history. The case is the long-running dispute between the U.S. and the E.U. over supposed illegal subsidies provided by both governments to its major plane manufacturers.

The standoff started in 2004 when the U.S. brought action against the E.U. for cheap loans afforded to Airbus. The E.U. promptly countered, saying the U.S. gave subsidies and extensive military contracts to Boeing that effectively provided the same (or similar) support.

The reality is aircraft design and development is such a risky long-haul venture that no one would do it without some level of state support.

The U.S. has done it over decades. Various European governments — and the E.U. as a whole — have too, as have the Japanese and, now, the Chinese.

Whether the subsides granted to Boeing and Airbus are more than legally appropriate will continue to be a source of revenue for expensive lawyers for years to come.

The WTO is due to rule in eight months’ time on whether U.S. subsidies to Boeing are lawful; the sense seems to be the WTO will rule they were not and, as such, we will be back to square one.

According to the Financial Times, the WTO authorized the U.S. to levy tariffs of up to 100% on $7.5 billion of the $11 billion the U.S. had originally applied to penalize. To the U.S.’s credit, the decision initially is to levy tariffs of 10% on aircraft and 25% on a diverse range of other products, as the below chart from the Financial Times illustrates — perhaps meant to encourage dialogue. 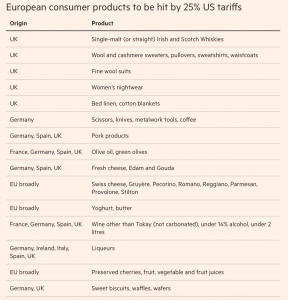 While a lot of hot air is blowing around, it would seem neither side wants a full-blown trade war over this issue.

Aircraft parts have been exempted from any immediate tariffs, said by the Financial Times to be in a reprieve for Airbus’ manufacturing plant in Alabama. Airbus, on the other hand, has cautioned that 40% of its aircraft-related procurement comes from U.S. suppliers, supporting some 275,000 American jobs in 40 states — any escalation will have a direct hit on the U.S. aircraft supply chain.

U.S. carriers share prices have taken a hit as concerns were raised that Boeing would not be able to meet demand and U.S. carriers would be forced to simply pay more for Airbus aircraft.

As such, one can see what a blunt instrument tariffs are; the ripple of unintended consequences spreads like a rock dropped in a lake, never mind a pebble in a pond.

Unless the U.S. announces a stay of execution, the E.U. can expect the imposition of tariffs on Oct. 18, with the biggest impact falling on the approximately $5.1 billion worth of aircraft imported in 2018; however, according to the Economist, only a portion of this total will be hit.

In the meantime, both sides are awaiting the WTO’s ruling on the case against the U.S. providing subsidies to Boeing.

As such, any resolution before May next year is unlikely. The aviation industry on both sides of the Atlantic can expect disruption and cost increases.

Whatever tariff supporters may suggest, there are rarely winners in tariff wars — only varying degrees of losers.