The Construction Monthly Metals Index (MMI) retraced by one point this month, falling for a November MMI reading of 76.
Keep up to date on everything going on in the world of trade and tariffs via MetalMiner’s Trade Resource Center. 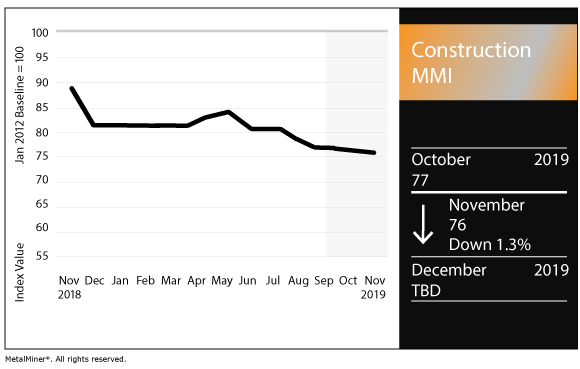 The Architecture Billings Index (ABI), produced monthly by the American Institute of Architects, checked in at 49.7 this month, up from 47.2 the previous month. Any reading below 50 indicates billings contraction.
By region, the South led the way in September with an ABI of 52.3, followed by the West (51.3). The Northeast (46.3) and Midwest (45.3) posted contractionary readings.
“Business conditions remained generally flat at architecture firms in September,” this month’s ABI report noted. “But while the Architecture Billings Index (ABI) score remained below the 50 threshold at 49.7 (a score over 50 indicates billings growth, a score below 50 indicates a decline), that score is 2.5 points higher than the August score, indicating that fewer firms saw declining billings in September.”
This month’s ABI survey asked industry professionals about the impact of project changes or delays.
More than half of respondents (52%) said they had experienced at least one project that was either significantly delayed or put on hold, redesigned or scaled back, or canceled outright.
Meanwhile, 46% of respondents said they haven’t had any significant project delays, changes or cancelations this year.

Pending home sales increased in September for the second straight month, according to the National Association of Realtors.
Contract signings increased 3.9% in September on a year-over-year basis. NAR’s Pending Home Sales Index jumped 1.5% for a September reading of 108.7 (a reading of 100 is equal to the level of contract activity in 2001).
Looking for metal price forecasting and data analysis in one easy-to-use platform? Inquire about MetalMiner Insights today!