Well, Boris the Bruiser has done it.

Boris Johnson’s Conservative party pulled off the strongest showing for the Tories in the British elections since Margaret Thatcher’s 1983 victory and a thumping majority of 79, as the Labour and Liberal Democrat parties vote collapsed.

While some outlets will seek to show this purely in terms of the public’s desire to leave the E.U., the reality is motivations, particularly for traditional Labour and Liberal Democrat voters, were many and varied.

There was considerable tactical voting and very real fear in the closing days of the campaign that a Labour government — or, more accurately, a hung parliament with a strong Labour position — would result in extreme socialist decisions being imposed on the country, such as nationalization of extensive parts of the private sector and sharp tax rises.

The pound rises and falls

There was also a pervading weariness with the whole Brexit process, even for those preferring the option to Remain, as there was a desire to see an end to the trauma (even if that meant leaving). 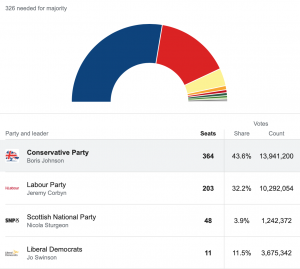 Although markets had positioned themselves for a conservative win, the pound had eased in the days running up to voting, as the Labour party seemed to be making late gains, according to polls.

As exit polls came out last night, the pound surged to over 1.33 against the dollar and over 1.20 against the Euro. Interestingly, although some analysts are expecting further gains, the pound has since retreated a little, particularly against the dollar, as the realization has set in that while the U.K. is almost guaranteed to now leave by Jan. 31, 2020, the terms of a trade deal with Europe remain to be worked out.

Furthermore, the Boris Johnson government has already nailed its colors to the mast in setting a deadline of Dec. 31, 2020 for that deal (or the UK will revert to a hard exit and revision to WTO rules)

So, the much-hyped wave of pent-up investment that had been waiting for the certainty a decision would bring may have to wait at least another year to discover whether the U.K. will have tariffs and what kind of barriers will exist between the U.K. and E.U. in the longer term.

An unwelcome development, at least for the union of the United Kingdom, is the success of the Scottish National Party (SNP) in Scotland.

The SNP, while predicted by exit polls to pick up 55 seats, still managed 48 and a dominant position north of the border on their strongly Remain ticket. That opens the door for another independence referendum with a view to an independent Scotland staying in the E.U. – not a move the E.U. has embraced over the last three years of debate, it has to be said.

But the fact remains, fears of a breakup of the U.K. have surfaced as a real possibility.

As for policy going forward, a new budget in February is expected to be stimulatory, with an increase in spending both on social services and, to a limited extent, on infrastructure.

As the Financial Times observed today, the Conservatives’ majority will give Johnson breathing space on domestic policy. It will also likely lead in time to a significant increase in infrastructure spending.

The Conservatives’ historical policy position — best described as metropolitan social liberalism — may be about to come to an end. They have won this election by enlisting new (for them) sections of the electorate; many of their gains are poorer seats, more reliant on public services and more socially conservative.

Brexit has allowed the Tories to reconnect with lower-middle class and blue-collar workers; its policies going forward will likely have to reflect that shift.

So, increases in spending and an end to tax cuts may prove more than just a campaign pledge. A move toward a more populist position is almost certain, with controls on immigration, a renewed focus on the use of foreign aid and various other policies likely.

But it will be the U.K.’s engagement with Europe over the next 12 months that will shape the kind of country it is to become.

However, failure to achieve a workable agreement will raise the specter yet again of isolation and economic hardship – to some extent, on both sides of the English channel — and the possibility of a breakup of the Union down the line.

PREVIOUS POST:
This Morning in Metals: Tariffs on $370B in Chinese goods to stay
NEXT POST:
Week in Review: Tariffs on Argentina, Brazil?; nickel prices slide; Saudi Aramco debuts on Riyadh exchange