The Raw Steels Monthly Metals Index (MMI) lost two points during the past month — indicating prices weakened slightly — for a March reading of 69.

Chinese price weakness led the index decline, as all Chinese prices fell (with the exception of Chinese coking coal). 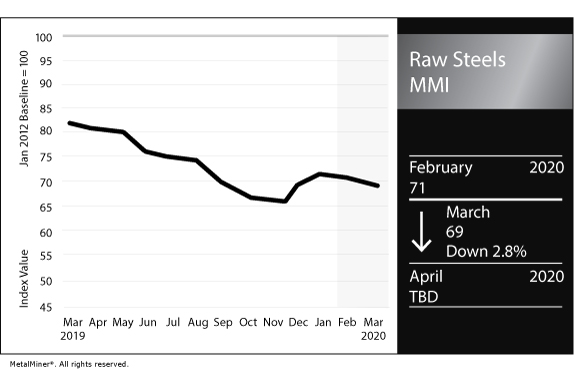 As noted in the MetalMiner Monthly Outlook (free trial available) released this week for March 2020, some producers announced price increases in early March, but it’s not clear yet whether these increases will stick at this time.

HRC prices fell by nearly 9%, while HDG and CRC price drops appeared milder (in the 4-6% range). Plate fell by around 1%.

Producers may expect to see strong demand improvements moving forward, limiting price declines seen thus far (even as demand stalls out short-term in China due to the coronavirus).

A number of demand-stimulating measures already announced by the Chinese government are widely expected to support steel prices moving forward.

Additionally, strong downward pressure on prices may be limited due to recent high raw material costs and probable lower operating margins for many Chinese producers.

On the other hand, inventories keep building, as noted by MetalMiner’s Stuart Burns in his recent article on rising Chinese steel inventories.

Based on recent estimates published by China’s National Bureau of Statistics (NBS), the sector’s profitability declined by 37.6% during 2019 compared to 2018.

China’s Ministry of Transport called for the resumption and acceleration of work on infrastructure projects this week, as reported by the press. The ministry called for projects to resume before March 15, according to the government circular.

Automotive sales in China may shrink 5% in 2020

According to the China Passenger Car Association in press reports, automotive sales during the first two weeks of February 2020 were down by 92% compared to the same period last year. Projections call for a decline of 70% for February in full.

For the year 2020 in full, analysts in China now project a 5% year-on-year decline, compared to previous projections of a 2% demand decrease for 2020, which would mark the third consecutive year of declining automotive sales in China.

The China Association of Automobile Manufacturers (CAAM) shared similar projections for the year, noting sales could be off by as much as 10% during H1 2020.

Korean steelmakers POSCO and Hyundai Steel noted they will attempt to increase prices during upcoming contractual negotiations, as reported by The Korean Times, even though a full recovery of demand is not expected until H2 2020.

Meanwhile, an unnamed government official commented that the Chinese market has been in over-supply since October 2019, marking a key source of downside price risk for Korean steelmakers.

However, analysts expect the Korean market may see a sharp recovery in H2 2020, as production stalled in H1 will likely get pushed forward to meet annual production plans. In addition, prices will be supported through increased Chinese stimulus measures.

Total crude steel capacity reduction will total around 5 million tons per year (10% of total annual capacity). However, an electric arc furnace will be installed at Nagoya Works, slated to open during H1 2022.

Additionally, development of more coastal steel capacity in China indicates stepped up export competition moving forward, therefore making it difficult for Nippon Steel to continue to export 40% of its output.

[Metal prices fluctuate. Key is knowing when and how much to buy with MetalMiner Outlook. Request a free trial.]

Steel Dynamics’ new EAF steel mill, located in New Sinton, Texas, is still under construction and has a targeted production start of mid-2021. The acquisition secures a cost-effective source of ferrous scrap for the EAF mill, according to company reporting.

As noted in the MetalMiner Annual Outlook, the new mill will have a capacity of up to 3 million tons.

Steel prices dropped this month, but producers look set to push back on price declines.

U.S. shredded scrap prices dropped by 5.1%, reversing most of last month’s increase, at a value of $281/st.

All Chinese prices in the index fell (with the exception of coking coal, which increased 5.2% to $263/mt).