At the behest of the American Primary Aluminum Association (APAA), U.S. Trade Representative Robert Lighthizer has been encouraged to push the Trump administration to rule this week against Canada’s duty-free status for primary aluminum into the U.S. market.

APAA’s case is “surging” Canadian imports are damaging the prospects for U.S. smelters and only a reinstatement of the tariff will save them.

In reality, while Canadian imports rose in Q1 — they jumped 46% year on year, according to Reuters — this was only because of the return of the Becancour smelter after a bitter two-year strike that ended in July 2019.

The plant produced 72,000 tons in January-March, compared with just 77,000 tons over the whole of 2019. This brings imports back to the historic five year average as this graph from ING illustrates.

Secondly, as Reuters goes on to point out, there is the little matter of COVID-19 and the demand destruction caused by the lockdown of North America’s automotive and construction sectors.

A significant proportion of the metal flowing across the border wasn’t being consumed by U.S. firms but was making its way into LME warehouses, which is now easing as automotive and aerospace begin to pick up again.

But just the threat of a return to the 10% tariff has been enough to cost consumers money.

The Midwest premium, after nearly a year of steady decline to around $170/ton, or $0.081/lb, has ripped back up to $300/ton where it was this time last year with September and November contacts prices both trading above $0.135 per pound Wednesday, ING reports. 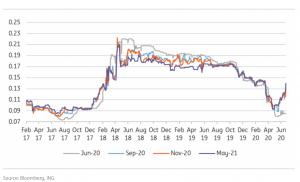 Despite the world being awash with aluminum — the bank suggests some 2.8 million tons of excess supply globally, some 60% of which is outside China — the resulting high headline LME inventory levels would suggest a low MW Premium would result.

But while LME inventory has mushroomed, approximately 87%, has been in southeast Asian warehouses. Only 2% resides in U.S. LME warehouses, while the stock and finance trade is continuing to put a squeeze on domestic U.S. metal availability.

The surge in the Midwest premium is, therefore, a logical reaction to not just a potential rise in the import tax on Canadian primary aluminum but the relatively tight nature of the U.S. domestic market.

Let’s hope the administration resists the temptation to play politics with the metals markets, however tempting the opportunity may appear to trumpet a gain for American jobs in an election year.