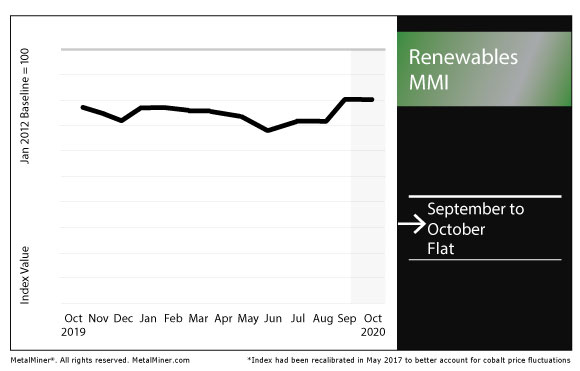 Cobalt, as we have noted in this space routinely, is coveted for its use in electric vehicle (EV) batteries.

However, cobalt is expensive. Tesla’s Elon Musk indicated the automaker would be moving to eliminate cobalt from its supply chain — that is, until the automaker signed a cobalt supply agreement with miner Glencore earlier this year.

As such, in China, the world’s largest automotive market, Chinese EV battery maker SVOLT said it will supply a cobalt-free battery to Chinese automaker Great Wall beginning next year, according to a report by news agency Reuters.

According to the report, the battery will use 75% nickel, 25% manganese and small amounts of other metals.

Speaking of cobalt-free batteries and cost, the LME price jumped in mid-September, rising from $33,000 per tonne to $34,000 per tonne.

The cobalt price, however, traded sideways the rest of the month.

The price has recovered from its first-quarter lows, when it reached $27,000 per tonne in mid-March.

As for Tesla, the automaker churned out 145,000 vehicles in the third quarter.

“In terms of days of sales, new vehicle inventory declined further in Q3 as we continue to improve our delivery efficiency,” the automaker said.

Tesla will announce its Q3 earnings at a later date.

“ArcVera has opened up an office in Bengaluru in the southern part of India. From there, it will deliver its expertise to project developers, lenders and investors — not only in India but also neighboring Southeast Asia and Pacific Rim countries.”

Like many countries around the world, India is looking to augment its renewable energy storage capacity.

“Energy demand is expected to reach 15,820 TWh by 2040,” Darabshaw continued. “As such, renewable energy will play an important role in the years ahead.

The GOES MMI, which tracks grain-oriented electrical steel, dropped 5.5% for this month’s reading. 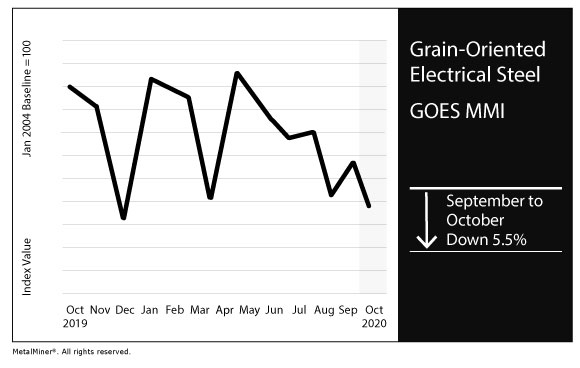 ArcelorMittal, a major global producer of electrical steel, announced late last month it aims to be carbon neutral by 2050.

Last year, the Luxembourg-based steelmaker committed to reducing its European emissions by 30% by 2030.

“Steel will remain a vital material for our world and indeed is the most circular of all materials,” ArcelorMittal President and CFO Aditya Mittal said in a release. “Our challenge is to be able to make steel using clean energy technologies on a commercial scale, while remaining competitive in the global steel industry.

“We are working on various pilot technologies which have excellent potential.  In Hamburg, where we own and operate Europe’s only DRI-EAF facility, we will test not only the ability of hydrogen to reduce the iron-ore and form DRI, but also then test that carbon-free DRI in the EAF in the actual steel-making process.”