The Copper Monthly Metals Index (MMI) increased for the fourth consecutive month, rising by 1.1%, as copper demand is likely to remain strong this year. 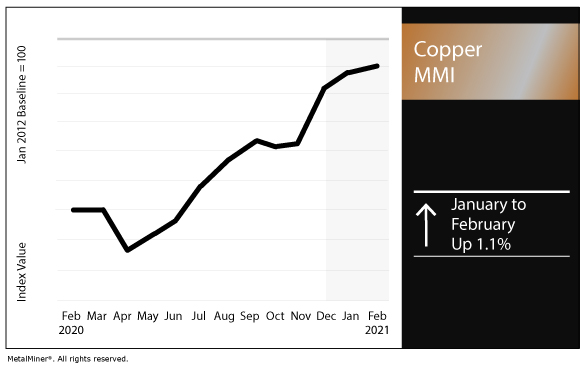 Copper prices traded sideways throughout January, which proved to be a slow month for the red metal. Most of its momentum over the past year came from China, which has stopped some of its manufacturing ahead of the Chinese New Year celebrations.

However, copper prices might pick up as key industries — such as construction, consumer appliances and automotive — continue to grow. Copper demand should also benefit from the “Buy American” policy that the Biden administration plans to implement.

The plan would promote the U.S. manufacture of essential components in construction, appliances, electronics and automotive.

As mentioned above, it’s not likely that copper demand will slow down in 2021.

In the US, new home and home renovation demand spiked since the pandemic started, along with electronics demand. Analysts at CitiBank expect the copper market to shift into a deficit in the second half of the year with a minor surplus overall for 2021, Reuters reported. They also forecast deficits in 2022 and 2023.

The US Census Bureau and the US Department of Housing and Urban Development reported building permits in December increased by 4.5% compared to November and 17.3% above the December 2019 rate. Privately owned housing continued to increase in December, rising by 5.8% from the previous month and by 5.2% compared to December 2019. The uptrend started in September 2020.

China will continue to play an important role in the copper market. The country accounts for about half of global primary consumption, which is then used to manufacture export goods.

According to the aforementioned Reuters report, appliances output also increased in China. Similarly, China’s refrigerators exports went up by 45% in December 2020 compared to December 2019. During the same period, exports of microwave ovens rose by 35%.

Indonesian politician Luhut Pandjaitan, said Freeport-McMoRan and Tsingshan Holding Group reached a $2.8 billion deal to build a copper smelter in Indonesia’s Weda Bay. The smelter would process copper concentrate from the Grasberg mine. Luhut did not report a timeline, per the report.

“The smelter will produce copper pipes and wires of which output can be worth $10 billion or more,” the minister reportedly told IDX Channel. The smelter will aim to produce copper products to be used in lithium battery components. Indonesia is working to build an electric vehicle supply chain, as it is also a major nickel producer.

According to the Institute of Scrap Recycling Industries (ISRI), the US sold more copper scrap to China for the first 11 months of 2020, compared to the same period during 2019. This came despite China’s 2018 tariff aimed at disrupting scrap trade flow.

From January-November 2020, the US exported 102,145 metric tons of copper scrap to China, up 20% year over year. As such, China received the most US copper scrap exports in 2020, indicating ongoing strong copper demand.

Copper demand in China powered price gains for the red metal throughout 2020.

PREVIOUS POST:
This Morning in Metals: EIA forecasts renewables share of US electricity generation to double by 2050
NEXT POST:
Tin market in a squeeze as supply is hard to find