A year later: Chatting with Josh Gilbert of Temperance Beer Co. on the aluminum can shortage, COVID-19 impacts 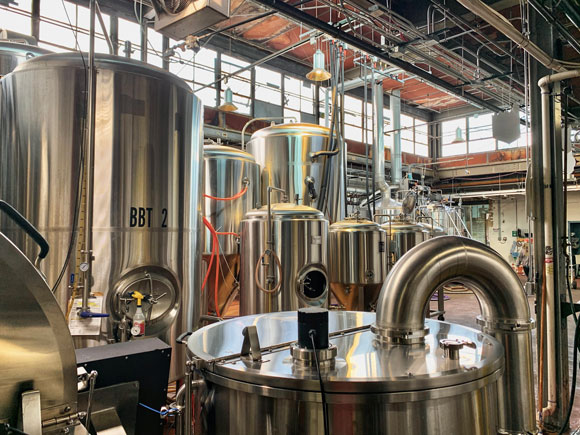 A little over a year has come and gone since the COVID-19 pandemic took hold in the US.

In addition to the immense human toll, the pandemic has changed the way many people live their lives. Work situations have changed, as many have switched out commutes to the office for a morning commute to their living rooms or home office spaces.

Furthermore, consumption habits have changed, too.

In the early days of the pandemic, many stocked up on masks, hand sanitizer and toilet paper.

The pandemic also changed consumers’ habits in other areas. One example? Beverages, namely where they are consumed — that is, not in bars — and in what type of container.

Whereas patrons may have consumed draught beer poured from kegs at a bar, many switched to drinking out of aluminum cans at home.

Naturally, this led to a run on aluminum cans and what has seemed to be a continuous can shortage that persists even now, over a year later.

We talked about what the last year has been like for the business, the shift in consumer habits, the resulting shift in the brewery’s procurement and his outlook for the rest of 2021.

COVID-19 pandemic impact — from keg to aluminum can

For brewers, the COVID-19 pandemic has shaken up their businesses in a number of ways.

Taprooms closed as a result of pandemic-related restrictions on indoor service. As such, brewers lost a valuable revenue stream that couldn’t necessarily be made up by can sales in stores and supermarkets.

For Temperance, Gilbert said the last year has been a challenge, but they weren’t comfortable opening for indoor service, even when restrictions eased. As a result, Temperance’s split of sales from kegs versus cans went from nearly 50-50 last year to skewing heavily in favor of cans.

According to sales numbers Gilbert shared for one week in March, the split shifted to 87-13 in favor of cans.

Like other brewers, they have had to transform the business over the last year in response to the circumstances.

“It’s a constantly evolving business model to switch to, on the production side, basically not filling any kegs and only filling cans,” he told MetalMiner last month. “Then on the taproom side we’ve got a drive-thru, tailgating and reserved seating on the deck – we’d never taken reservations before. It’s a lot of change.”

Furthermore, it wasn’t just about the amount of change, but its suddenness.

“One of the most challenging things is that you can change your hours based on ‘oh OK, summer’s coming up, we’re going to have more people drinking beer so we’ll extend our hours,'” he said. “Like we do every year. This was just ‘OK, now next week everything’s changing.'”

In turn, businesses all went to the market at the same time looking for the same items to help them adapt. That meant patio heaters, fire pits and Plexiglas, among other items.

While constant, unpredictable change can be exhausting, Gilbert said he can’t complain.

“We still have the doors open,” he told MetalMiner last month. “Most of our tanks are full of beer right now.”

Despite the various challenges of 2020, Gilbert said the brewery’s volumes went up.

But so did the cost of materials.

As has been well-documented — both here on MetalMiner and media reports elsewhere — the beverage industry struggled with a can crisis that continues to this day.

Consumer preferences changed, as many people stayed home and generally did not go to bars and restaurants, whether as a result of COVID-19 restrictions imposed by local governments or due to personal concerns.

As a result, breweries, like Temperance, had to change their product delivery mix from kegs to heavily favoring cans.

As a result, a run on aluminum cans kicked off. While it hasn’t necessarily impacted the mass market beverage companies, local breweries have felt the supply squeeze. The shift in consumer demand has been so stark that some beers that Temperance previously brewed only for draught have gone into cans, Gilbert said.

For cans, Temperance typically gets its supply from three primary sources. Gilbert said the brewery didn’t run into serious problems until the last few months.

Ball Corporation, the aluminum can giant, is one of its suppliers. For can ends (i.e., the lid), he said lead times usually fell between 10-14 days.

But when he went to make an order in February, the lead time had ballooned to over three months. As a result, they had to order ends from another supplier, albeit at a higher price.

Temperance purchased a new canning line that will allow the brewery to produce more cans more quickly. The new line will also roll out 16-ounce cans in addition to standard 12-ounce cans. Gilbert said they sold their previous canning line, which they had used since 2014.

Once running at full capacity, Gilbert hopes the new canning line — which has two lanes — will produce between 60 and 80 cans per minute.

But the supply problems aren’t just limited to can components. Over the last year, there have been concerns over shortages of carbon dioxide and even cardboard case trays, Gilbert said.

“It’s not just aluminum,” he said. “It seems like it’s everything.”

In response to the surge in demand, Ball announced in September 2020 its plans to build a new aluminum can manufacturing plant in Pittston, Pennsylvania. Ball said it would make an initial $300 million investment in the plant. The plant is scheduled to come online in mid-2021. The new plant will create about 230 new manufacturing jobs, the company said.

Market commentators continue to suggest an imminent surge in sales on the back of general pent-up demand. Having spent much of 2020 indoors and away from family and friends, many will want to go on car and plane trips, head back to bars and restaurants, enjoy sporting events and more.

In short, people will want to spend money, the logic goes.

While the pandemic is far from controlled, vaccination efforts continue apace. According to the Centers for Disease Control and Prevention, 26.0% of the US population is fully vaccinated. Meanwhile, 40.1% have received at least one dose.

Furthermore, of those 65 and older, 80.3% have received one dose. In that same age group, 65.1% have completed a full vaccine regimen.

Many are already dreaming up summer vacation plans and planning outings with friends and family.

Gilbert said he’s optimistic about the rest of 2021.

“I think we’re on the right track and it’s definitely looking up for the summer and hopefully the fall,” he said.