The Copper Monthly Metals Index (MMI) surged by 10.6% for this month’s reading, as the copper price has soared to a record high. 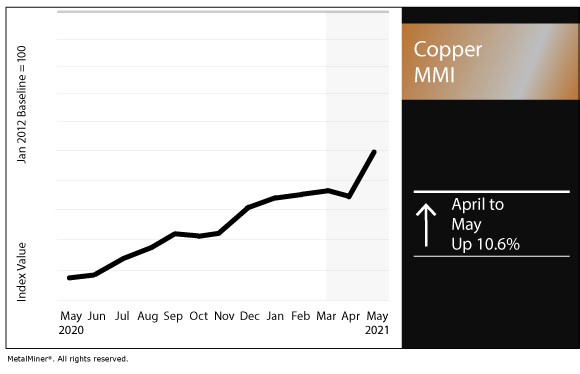 Last month, MetalMiner’s Stuart Burns dissected various views on the copper market after prices had retraced from a February peak of around $9,600 per metric ton.

Would the price go up or would it languish? As he noted, banks held differing opinions, with Goldman Sachs being particularly bullish on the red metal.

“JP Morgan is forecasting copper prices to peak at $9,000 per ton this quarter and slide back to $7,865 per metric ton over the second half of the year,” Burns wrote last month. “It argues more plentiful mine supply will take the steam out of the copper market.

“Copper consumers no doubt hope JP Morgan have got it right.

“But as Reuters observes, smelter stocks are low and will take time to replenish. In the meantime, the lack of smelter output in Q2 will leave the market undersupplied in what remains a robust demand environment.”

The answer to the aforementioned question did not take long to materialize.

After previously touching 10-year highs, the copper price has continued to rise and hit record highs this month.

The LME three-month copper price closed Monday at $10,720 per metric ton, up a whopping 19.32% from the previous month.

Meanwhile, the US dollar has backtracked of late. The US dollar generally trades inversely to commodities. The dollar index has dropped to just over 90, down from over 93 at the end of March.

Elsewhere, daily trading volumes on the LME and COMEX have increased. COMEX copper futures volumes fell to 48,028 on May 3 before surging over the past week to 181,323 as of May 10.

Copper is among the metals that are vital to the transition toward renewable energy, electric vehicles and infrastructure. As the rest of the global economy recovers, albeit unevenly, demand for metals like copper remains strong and will only continue to grow.

Market tightness continues to support the copper price. Furthermore, a recent International Energy Agency report suggests a severe deficit is ahead in the coming years if new supply does not come online.

“In a scenario that meets the Paris Agreement goals, clean energy technologies’ share of total demand rises significantly over the next two decades to over 40% for copper and rare earth elements, 60- 70% for nickel and cobalt, and almost 90% for lithium,” the IEA said in its report, “The Role of Critical Minerals in Clean Energy Transitions.”

Speaking of China, the country is looking to cut its purchases of copper concentrate this year in an effort to curb carbon emissions, research house Antaike said.

According to Antaike, the country’s 15 largest smelters agreed to cut purchases of concentrate by 1.26 million tons. That is equivalent to about 300,ooo tons of metal, a decline of 8.8% from last year.

As such, China will be more active in the scrap market. Burns covered the trend of China’s rising scrap imports last month.

“High-grade scrap supply is also not likely to be a major hurdle, Reuters explains, saying Malaysia has become a significant refining hub for lower-grade scrap destined for China,” Burns explained. “The US is exporting more copper scrap to Malaysia now than it is directly to China.

“China’s relaxation of copper scrap imports has created a significant — some may say seismic shift — in the copper market. That shift has taken the heat out of the refined metal market and supercharged the scrap market.

“Current higher LME prices will generate more scrap and, given 6-12 months, improve scrap supply. As such, there is not much ground for copper price weakness in a globally recovering market.”

Despite current tightness, mine supply is likely to improve throughout the year.

Meanwhile, refined production rose by 1.7% year over year, while scrap production was flat.