The Automotive MMI got off to a hot start in 2018, picking up three points en route to a February reading of 100. The February reading marked the first triple-digit performance for the MMI since it posted a 101 in January 2014. 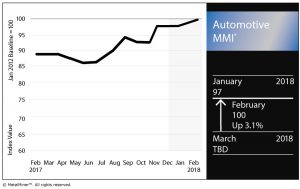 As for the basket of metals, a majority of the bunch posted price increases this past month.

January proved to a be a mixed bag for automakers vis-a-vis their U.S. sales.

According to data from Autodata Corp released Feb. 1, topping the charts in January was General Motors Corp., with 198,386 units sold, up 13% year over year. Sales of light trucks carried the day, as they increased 12.6% to soften a 30.2% drop in car sales. (General Motors is expected to announce its fourth-quarter 2017 and full-year earnings Tuesday, Feb. 6.)

In mid-January, GM forecasted 2018 would be another good year. According to a GM release, the company benefited from “continued strength” in North America and China, plus improvement in South America.

“GM had a very good 2017 as we continued to transform our company to be more focused, resilient and profitable,” GM Chairman and CEO Mary Barra said in the release. “We are positioned for another strong year in 2018 and an even better one in 2019.”

GM touted its growth in truck sales in a release last Thursday.

“All of our brands are building momentum in the industry’s hottest and most profitable segments,” said Kurt McNeil, U.S. vice president, sales operations, in the prepared statement. “Chevrolet led the growth of the small crossover segment with the Trax as well as the mid-pickup segment with the Colorado. Now, we have the all-new Equinox and Traverse delivering higher sales, share and transaction prices.”

Meanwhile, Ford Motor Company, which called 2017 a “challenging” year during its earnings call last week, didn’t have quite as good of a month. Ford posted a 6.3% year-over-year sales drop, with 160,411 units sold in January.

Volkswagen, meanwhile, found itself adding to the bad press from its Dieselgate scandal when it was reported last month that the company conducted exhaust tests on monkeys. Volkswagen’s January U.S. sales were down a whopping 32.8% year over year.

Everybody knows about Tesla and Elon Musk — but what about China and its role in what will assuredly become an increasingly electrified automotive world?

According to Bloomberg, one small town in southeast China will house a planned $1.3 billion battery factory that could stymie the global competition.

“The company plans to raise 13.1 billion yuan ($2 billion) as soon as this year by selling a 10 percent stake, at a valuation of about $20 billion,” the Bloomberg report states. “The share sale would finance construction of a battery-cell plant second in size only to Tesla Inc.’s Gigafactory in Nevada—big enough to cement China as the leader in the technology replacing gas-guzzling engines.”