The Construction MMI stood pat this past month, holding at 94 for our February reading. 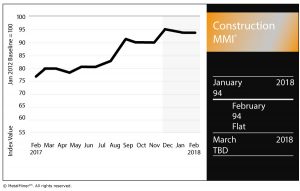 Within the basketball of metals, Chinese rebar dropped 6.6%, while Chinese H-beam steel rose 3.3%.

According to the most recently available Census Bureau data, U.S. construction spending in December 2017 amounted to $1,253.3 billion, up 0.7% from the revised November estimate of $1,245.1 billion.

Home Sales Down in December but Up for the Year

According to the National Association of Realtors, existing-home sales dropped in December but were up 1.1% for 2017.

“Existing sales concluded the year on a softer note, but they were guided higher these last 12 months by a multi-year streak of exceptional job growth, which ignited buyer demand,” said Lawrence Yun, the NAR’s chief economist, in a prepared statement. “At the same time, market conditions were far from perfect. New listings struggled to keep up with what was sold very quickly, and buying became less affordable in a large swath of the country. These two factors ultimately muted what should have been a stronger sales pace.”

New housing starts, however, were down significantly in December.

The Future of Construction

According to an article in Forbes, three trends could have a significant impact on the construction industry: robotics, drone imagery and digital project collaboration tools.

“Construction will benefit from robotics in work that is dangerous, is repetitive, and where heavy lifting is required,” Zak Podkaminer, of Construction Robotics, told Forbes. “[In] high precision work such as complex designs and patterns, robotics will provide a significant time savings allowing for more digital fabrication and provide architects more creative flexibility.”