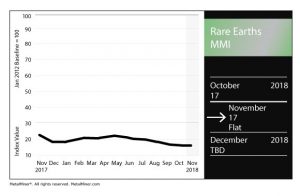 China’s dominance in the rare earths sector is well-documented.

The country’s sway in the market is significant — one should look no further than the U.S.’s $200 billion tariff list instituted in September.

An original list of Chinese products targeted for tariffs included rare earths — but when it came time to finalize the list, the rare earths were removed.

As such, as the world’s biggest producer and supplier of rare earths, China has considerable influence in the market; anything Beijing does with respect to output of rare earths is important.

According to a Reuters report citing the Shanghai Securities News, the Chinese government recently denied claims that it has slashed rare earth output in the second half of this year.

Reuters had previously reported data suggesting China was slowing exports in an effort to boost prices.

China’s Ministry of Industry and Information Technology, however, denied the claim, according to the recent report.

Lynas Gets a Boost

Meanwhile, outside of China, Australian rare earths miner Lynas saw its shares rise on news that it would be allowed to continue to store waste materials at a Malaysian facility, the Financial Times reported.

The company’s shares rose as high as 8.5% on the news before tracking back for a more modest 0.9% jump, according to the report.