Can the Chinese Government Keep Steel Production in Check in 2019?

A recent goal of cutting 150 million metric tons of steel production capacity by 2020 was achieved by the end of 2018, according to the Chinese government. (By the way, no such purely production-focused reduction goal exists for 2019).

According to a recent Reuters article, on the other hand, in June 2018, China’s State Council banned new capacity development for steel, among so2me other primary commodity products, in some key geographic areas, such as Beijing-Tianjin-Hebei and the Yantze River Delta Regions.

The Chinese government mandated that blast furnace steel operations in Tangshan and Handan, China’s largest steelmaking cities, continue production cuts, but at a reduced rate of 20% of total capacity for April-June (compared to the 30% capacity reduction ordered for the November-March period).

These cuts target improvement in air quality by reducing the concentration of PM2.5 particulate matter by a minimum of 5% this year, when compared to 2018. Some production facilities must even leave the region as the government seeks to improve the quality of life in pollution-affected areas, such as Beijing, which is surrounded by Hebei province (the location of multiple steelmaking cities, including Tangshan and Handan).

When prices rise, however, these mandates become more difficult to enforce.

According to the latest figures from the World Steel Association, China’s crude steel production increased by 9.2% over February production one year earlier, with 71 million metric tons produced.

China’s production increase surpassed that of any other country. Compare, for example, that India and South Korea also increased production year on year, based on February numbers, at 2.3% and 1.1%, respectively. Japan’s production declined 6.6% for the same reporting period.

However, in the most recent 10-day reporting period of March 11-20, CISA mill production actually decreased by 3.56% — the equivalent of a 68 million metric ton production decrease per day (when compared with the 10 days prior). Inventories decreased once again during the period, by 16.06%, registering at 11.63 million metric tons at the end of the month. That indicates demand remains solid, at least at this time, or we would expect inventories to increase.

CISA members account for around 80% of total Chinese production, made up of medium- to large-size producers, predominantly, with a stronger focus on flat steel over long steel products.

Blast furnace operations at 247 Chinese steel plants tracked by MySteel reached a 20-week high during the week March 29-April 4, when capacity utilization increased to 79.45%, up 1.13 percentage points from the previous week.

The primary driver behind Chinese production levels points to prices, not government mandates or policies (although perhaps the government may have more success curbing out-and-out new projects).

Therefore, if production is up, prices must be up.

Based on a look at prices through early April, Chinese steel prices did in fact continue to rise, but just moderately. 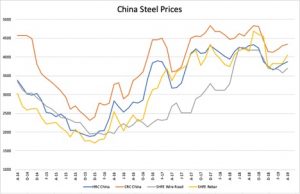 Chinese HRC, CRC, HDG, and plate prices tracked by the MetalMiner IndX(™) all increased last month, as reported by MetalMiner earlier in April.

HRC prices moved synchronously with the other major steel prices this month (CRC, HDG, and plate), with roughly the same price spreads as the last month or so.

SHFE wire rod and SHFE rebar prices also increased, as shown in the chart, along with China HRC and CRC prices.

As government stimulus measures currently move through the Chinese economy during the height of the annual construction season — with more stimulus measures expected — prices could remain supported in the short term.

The outcome suggests additional increased production by Chinese mills looking to take advantage of the higher prices, if the government track record of curbing production stands. This means production will likely continue to increase if prices increases, therefore possibly driving prices back down over a longer-term period.

During the height of the construction season and while Chinese stimulus measures impact prices in the short term, prices may remain higher.

Therefore, organizations need to watch the market carefully for opportunities to purchase as price increases manage to outpace increased production during the short term.