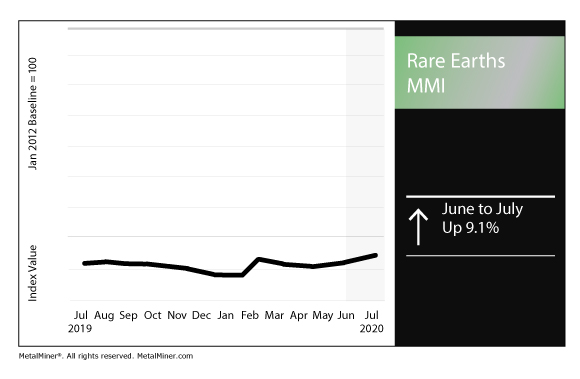 In other news, a new rare earth processing facility has opened in Colorado, mining.com reports.

USA Rare Earth and Texas Mineral Resources announced last month that the plant in Wheat Ridge, Colorado, had received the necessary permits to open. According to the report, the plant will be the first to focus on the separation of the full range of rare earth elements in the U.S. since 1999.

“As the U.S. and Australia are partner nations in the NTIB – the National Technology Industrial Base, and have announced a collaboration on strategic minerals exploration, extraction, processing and research, and development of rare earths and high performance metals, our collaboration with Arafura is also an example of concrete steps demonstrating how the U.S. and Australia can address the need for a reliable rare earth supply chain independent of China,” said Pini Althaus, CEO of USA Rare Earth, in a release dated Dec. 22, 2019. “Our collaboration with Arafura also underscores the versatility of our Continuous Ion Exchange/Continuous Ion Chromatography (CIX-CIC) processing method that enables us to work with feedstock from projects other than our Round Top deposit.”

The development comes on the heels of talks between U.S. President Donald Trump and Australian Prime Minister Scott Morrison regarding increased cooperation between the two countries with respect to “strategic minerals exploration, extraction, processing and research, and development of rare earths and high-performance metals,” the release noted.

The U.S. has sought to develop and strengthen its own rare earths supply chains to lessen dependence on China, with which the U.S. has been locked in a protracted run of trade tensions throughout Trump’s time in office. China controls more than 80% of global rare earths output, according to the National Bureau of Asian Research.

Rare earths are coveted for their use in a variety of high-tech capacities, including semiconductors, cellphones, batteries and military applications.

With respect to military applications, earlier this year the Department of Defense opted to freeze funding for two rare earths separation facility projects slated for Lynas Corporation and MP Materials, at least in part over concerns regarding MP Materials’ ties to the Chinese government, Reuters reported.

Lynas chair to step down later this year

Lynas Corporation, the world’s largest rare earths miner and processor outside of China, has announced its chairman will retire later this year.

Mike Harding, chair of the firm’s Board of Directors and a non-executive director, will retire effective Sept. 30, 2020, the company announced Tuesday.

“Mike Harding joined the Board as Non-Executive Chair at the start of 2015 and has overseen the company’s turnaround and growth to become the world’s second largest producer of separated Rare Earths products,” Lynas said in a prepared statement. “The Board and management of Lynas wish to recognise and thank Mike for his many contributions over the past five and a half years and to wish him all the very best for the future.”

Kathleen Conlon, a non-executive director at Lynas since 2011, will succeed Harding in the role of non-executive chair, the firm said.