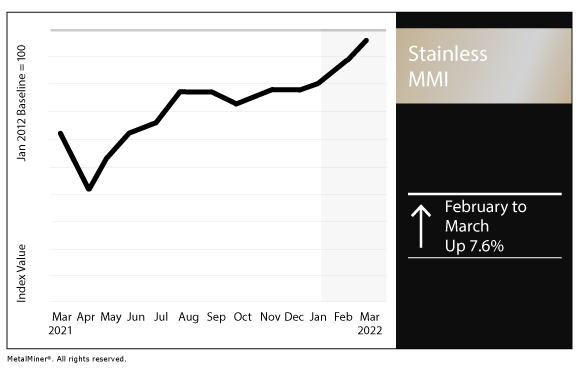 Russia accounts for roughly 7% of global nickel supply. So, the possibility for supply disruptions, on the back of mounting sanctions from the West, adds pressure to the already tight market.

Prior to the invasion, nickel prices traded within a bullish pennant, a trading pattern that typically indicates the continuation of strong prices. The Russian invasion of Ukraine provided a catalyst, as prices spiked with tremendous bullish strength and confirmed the technical structure breakout.

By Monday, however, nickel prices at one point topped $100,000 per ton. As a result, the LME stepped in Tuesday, suspending nickel trading and canceling trades. The suspension will likely extend several days.

These movements triggered a chain reaction of buy orders. As a result, the nickel price skyrocketed to stunning levels.

The best way to track monthly nickel prices is to sign up for MetalMiner’s monthly MMI reports, which come direct to your inbox.

A decline in warehouse inventories does not inherently translate to rising prices.

However, falling nickel stocks at LME warehouses set the tone of an ever-tightening market on the heels of escalating tensions between Russia and Ukraine.

Concern over tight supply remained in February as inventories continued to fall. The Russian invasion set fire to those concerns and caused prices to skyrocket.

The market awaits the LME’s next steps. The current spike will likely prove short-lived and fall back when trading resumes. As stocks now sit below the 77,000-ton mark as of early March, the market remains tight.

MetalMiner’s free weekly newsletter provides up-to-date metal price intelligence on the impact of the war in Ukraine on metal prices.

As with aluminum, the tight market has likely insulated the mining company thus far from targeted sanctions. Nonetheless, supply from Russia remains vulnerable to disruptions. This has spurred companies in recent days to look elsewhere to secure future metal.

As the world’s three largest shipping container lines announced the suspension of non-essential deliveries to and from Russia, numerous companies announced intentions to look elsewhere for nickel supply.

Outokumpu, which sources between 6-7% of nickel from Nornickel announced, “given the situation in Ukraine, we are looking for alternatives for Russian supply for nickel.” According to the Wall Street Journal, BASF SE indicated “it would fulfill existing contracts with Nornickel but not pursue any new business with the Russian company.”

As the nickel price spikes, shares of Nornickel continue to plummet. Shares dropped nearly 67% between Feb. 25 and March 1 and continue to fall.

Nonetheless, Finnish steelmaker Outokumpu remains optimistic about the short-term impact that the Russian invasion will likely have on the company.

According to a Feb. 25 press release, the company “does not expect any material impacts from the situation on its business and operations.” Recycled steel accounts for more than 90% of raw materials used, none of which is sourced from Russia or Ukraine. As the company looks elsewhere to replace its reliance on Russian nickel, alternate energy sources are likewise “being tested,” as Outokumpu currently acquires energy from the European market.

Outokumpu also indicated it independently sources its ferrochrome from its chrome mine and ferrochrome production in Finland.

LME three-month nickel rose by 11.31% to $24,750 per metric ton. (As noted previously, the three-month price has increased significantly since the start of the month.)