Nickel in deficit as LME inventories continue to decline

Inventory drawdown is the defining narrative at the moment, and nickel is part of the story.

Economic recovery around the world is patchy. Some countries are recovering strongly, while some are still struggling. Inflation is surging and analysts are having trouble agreeing whether 2022 can see anything like 2021’s rate of growth as a result.

All the metals intelligence you need, including nickel and stainless steel, in one user-friendly platform with unlimited usage. Request a MetalMiner Insights platform demo.

But one area of near universal concern is dwindling exchange and trade inventory stock levels.

Take nickel, for example. Nickel stockpiles on the London Metal Exchange recently fell for the 51st straight day, a Financial Times post reports. Meanwhile, in China, nickel stocks in official warehouses are close to a record low at just 4,859 metric tons. Aluminum inventories are a fraction of levels held two years ago. U.S. crude inventories fell to their lowest levels since October 2018.

While the oil market is broadly in balance, both nickel and aluminum are in deficit.

According to the Financial Times, nickel registered a supply-demand deficit of around 180,000 tons last year. That is equal to approximately 6% of its total market size. Not surprisingly, nickel prices have been driven higher both by industrial metals demand and investor speculation.

END_OF_DOCUMENT_TOKEN_TO_BE_REPLACED

Nickel, traditionally largely consumed in the stainless steel industry, is enjoying strong support from its role as a lithium-ion battery enhancing metal.

The use of nickel reduces the need for cobalt, significantly battery reducing costs. Not surprisingly car makers are scrambling to lock up supplies as Chinese battery firms get first to market investing in mines and refining.

Want more from MetalMiner? We offer exclusive analyst commentary in our weekly updates – all metals, no sales fluff.

BHP, for example, signed a deal last year to supply Tesla with nickel from its west Australian mine as demand from the EV market finally — after years of promise but poor uptake — begins to ramp up.

Traditionally, the stainless market has demanded purity and price. However, the battery market is also demanding as low a carbon footprint as possible from all its material suppliers (aluminum, nickel, cobalt, etc.).

That, in part, is what is behind BHP’s investment in a small, London-based nickel miner Kabanga Nickel Ltd.

END_OF_DOCUMENT_TOKEN_TO_BE_REPLACED

This morning in metals news: nickel prices have consolidated in December; North American Stainless announced a reduction in its fuel surcharge; and, lastly, the Energy Information Administration reported U.S. liquefied natural gas exports reached a record high in the first half of 2021.

However, the LME three-month nickel price has since cooled.

Nickel closed last week at $20,125 per metric ton, according to MetalMiner Insights data. The price is down 1.5% month over month.

Speaking of nickel — a majority of which goes into stainless steel production — North American Stainless announced a reduction in its fuel surcharge for stainless flat and long products.

END_OF_DOCUMENT_TOKEN_TO_BE_REPLACED

The Stainless Monthly Metals Index (MMI) rose by 4.3% for this month’s reading, as news of a supply deal by China’s Tsingshan Holding Group helped push the nickel price downward. 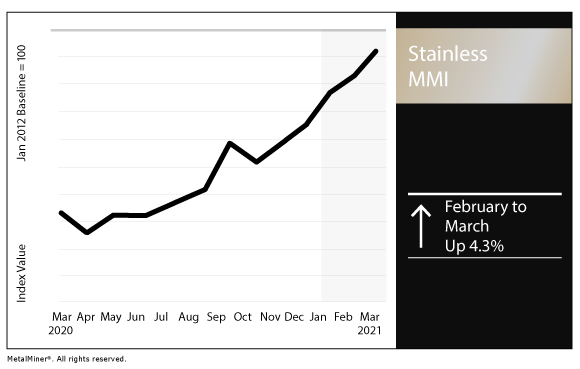 The nickel price, like most other base metals, surged through the first two-thirds of February.

From there, however, the price dropped, particularly after news of supply deals by China’s Tsingshan Holding Group.

Tsingshan will provide a total of 100,000 metric tons of nickel matte to Huayou Cobalt and CNGR Advanced Material, Reuters reported.

“Nickel’s narrative has largely been predicated on a shortage of battery-grade metal driven by EV demand,” MetalMiner’s Stuart Burns explained earlier this month.

“However, Tsingshan’s supply contract and capacity announcements suggest there will be sufficient supply. As a result, the nickel market reflected a sharp rethink of the deficit view.

“Demand undoubtedly remains robust for nickel. Its medium- to longer-term outlook remains positive on the back of stainless and battery demand.”

A price drop at some point was expected.

“It’s expected that the market would see some price corrections,” MetalMiner CEO Lisa Reisman explained. “Now we are looking closely to see if prices break support levels or hold. Most of the base metals appear to have held onto their support, with the exception of nickel.

“However, the falling nickel price will not result in more availability or shorter lead times. In fact, more fabricators and OEMs have started to pursue import options to help alleviate supply chain hiccups.”

END_OF_DOCUMENT_TOKEN_TO_BE_REPLACED

What goes up must (eventually) come down — does the old saying apply to nickel prices?

Up to this week, the nickel bull story had been roaring along.

But one announcement has seen that bull run hit a brick wall.

Under the agreement, Tsingshan will supply 60,000 tonnes of nickel matte to Huayou and 40,000 tonnes a year to CNGR, starting from October 2021. Tsingshan is China’s largest producer of stainless steel.

Just this morning, news sources like MetalBulletin were still promoting the bull narrative, saying nickel premiums continue to rise in China, while ore prices set another record high (even as the European cut cathode premium rises a further 5%).

But almost simultaneously, Reuters reported hot-off-the-press details of the Tsingshan deal and a sharp sell-off ensued. The post noted nickel fell 8.5% to $15,945 per metric ton on the LME for the biggest intraday loss since 2016. Shanghai prices fell by the most in nine months. The SHFE June nickel price ended 6% lower at RMB 130,510 ($20,181) per ton, according to Reuters.

Investment and the supply outlook

The Economic Times posted further details, reporting Tsingshan plans to expand investments in Indonesia. Tsingshan plans for its nickel equivalent output to reach 600,000 metric tons this year. Meanwhile, it has a target of 850,000 tons in 2021 and 1.1 million tons by 2023.

Nickel’s narrative has largely been predicated on a shortage of battery-grade metal driven by EV demand.

However, Tsingshan’s supply contract and capacity announcements suggest there will be sufficient supply. As a result, the nickel market reflected a sharp rethink of the deficit view.

Demand undoubtedly remains robust for nickel. Its medium- to longer-term outlook remains positive on the back of stainless and battery demand.

Indonesia’s efforts are finally paying off. The country is ramping up refined metal output, albeit under Chinese control. As a result, output of battery and refined grades of nickel is increasing. Meanwhile output of lower grade nickel pig iron is declining.

Nevertheless, the world does not seem quite as short of nickel today as it did yesterday.

Do you know the five best practices of sourcing metals including stainless steel?

Aside from steel capacity utilization, the EIA released its Monthly Energy Review today, reporting total energy production of 64.46 quadrillion btu through the first eight months of the year.

END_OF_DOCUMENT_TOKEN_TO_BE_REPLACED

This Morning in Metals: U.S. steel imports down 22% through October

This morning in metals news: U.S. steel imports were down by 22.2% year over year through the first 10 months of 2020; German steelmaker Thyssenkrupp AG is seeking state aid; and the nickel price has bounced back in November after falling during the second half of October.

U.S. steel imports through the first 10 months of the year totaled 19.3 million net tons, down 22.2% year over year, the American Iron and Steel Institute (AISI) reported.

Bloomberg reports German steelmaker Thyssenkrupp is in talks with the German government over a potential aid package.

END_OF_DOCUMENT_TOKEN_TO_BE_REPLACED

This Morning in Metals: Nickel price gains to start the week

This morning in metals news: the nickel price has gained to start the week; Reliance Steel and Aluminum Co. recently released its Q3 results; and, finally, the U.S. imported $19 billion in energy goods from Mexico last year.

The LME three-month nickel price gained over the first two sessions of the week.

Closing Tuesday at $15,384 per metric ton, the LME three-month nickel price gained $236 per metric ton over the previous 24 hours.

In its Q3 financial results, Reliance Steel and Aluminum posted pretax income of $127 million, up from $102 million in Q2 2020.

END_OF_DOCUMENT_TOKEN_TO_BE_REPLACED

The nickel market is set for major disruption

There is a looming crisis in the nickel market.

Some would argue it’s a good problem to have. Demand is set to rise on the back of increasing uptake of electric and hybrid vehicles through this decade. More and more governments will mandate the production of electric vehicles (EVs) over internal combustion engine (ICE) autos. In parts of Europe, there will be outright bans on new ICE vehicles inside 10 years.

However, if nickel supply becomes constrained, consumers are going to pay the price.

It should be said that today the problem barely registers as a price lever.

According to a recent McKinsey report, the stainless steel industry consumers 74% of nickel produced today, dwarfing the 5-8% going into batteries.

But the type of nickel required for battery production is what makes supply so sensitive in the future.

As the report explains, there are two types of nickel. Class 1 predominantly comes from the concentration, smelting and refining of sulfide ores. Meanwhile, Class 2 comes from ores, called saprolites and limonites, with higher iron and other (for batteries) levels of contaminants, such as copper.

So, whereas the stainless steel industry, to a large extent, can use a mix of Class 1 and Class 2, the battery industry draws its raw material from just Class 1, representing a more restricted 46% of the nickel supply market.

Worse, after the all the focus on the cobalt market — with its environmental, social, and corporate governance (ESG) concerns from countries like the Democratic Republic of the Congo — major consumers like Tesla are keen to establish long-term supply arrangements with nickel producers in sustainable locations with more robust ESG standards.

END_OF_DOCUMENT_TOKEN_TO_BE_REPLACED

This Morning in Metals: Global alumina production rises in August 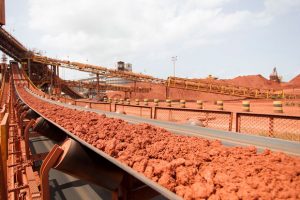 This morning in metals news: global alumina production rose 2.7% year over year in August; China’s industrial profits fell through the first eight months of the year; and nickel prices have taken a dive over the last month.

Check if your service center is providing you with price transparency for your aluminum spend.

Production of the aluminum raw material was about flat with the previous month. However, August production rose 2.7% year over year, up from 11,079 metric tons in August 2019.

Although China has bounced back economically in many respects, its industrial profits fell 4.4% during the first eight months of the year, the National Bureau of Statistics of China reported.

After rising consistently since late March, the nickel price took a step back in September.

The LME three-month nickel price closed Monday at $14,405 per metric ton, or down 5.52% compared with a month ago.