Buyer Beware When it Comes to Cobalt

Cobalt may be a minor constituent of lithium ion batteries, but it is a crucial one.

Lithium has been the metal in the news this year. Bolstered by rising demand for hybrid and electric cars, however, the supply market has been struggling to keep up with demand.

Not that the world is short of lithium, as we wrote recently — it is widely distributed and relatively abundant. But projects time to ramp up, and while many are on the planning board, not all reach production maturity.

Cobalt, on the other hand, is a much more constrained market — not just constrained, but the vast majority is from politically unstable sources.

According to Reuters, two-thirds of global cobalt comes from just one politically very unstable country – the inappropriately named Democratic Republic of Congo, with some 80,790 tons of the metal sourced from there last year out of a total market of about 119,710 tons.

Worse, the DRC is sliding back into yet another potentially bloody civil war.

Joseph Kabila was elected for a final five-year term in 2011 on a mandate that ran out in 2016, but he clings on even though no more than 10% of Congolese support him, according to the Economist. Ten of 26 provinces are suffering armed conflict, the Economist reports, with dozens of militias once again on the warpath.

Some 2 million Congolese fled their homes last year, bringing the total still displaced to around 4.3 million out of a total population of nearly 80 million. The state is tottering and the president is illegitimate, the Economist says. Ethnic militias are proliferating and one of the world’s richest supplies of minerals is available to loot. 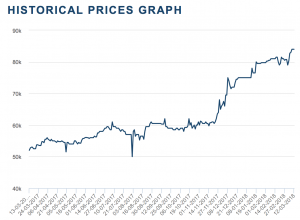 So the rise in the price of cobalt — while it mirrors that of lithium and has so far been driven largely by battery and super alloy demand — is fragile to political unrest in a way that lithium is not.

Of the two, cobalt represents a bigger supply risk and may yet prove the cause of considerable volatility if the DRC’s neighbors cannot get their act together and seek a solution in the most resource-blessed but politically cursed of African nations.