Against advice from consumers and pleading from politicians in Europe and the Americas, President Trump went ahead with the imposition of 25% import tariffs on steel and 10% on aluminum from the E.U., Canada and Mexico.

Stock markets dropped on the news and politicians blustered while the biggest loser, U.S. consumers, resigned themselves to paying higher prices for the foreseeable future.

According to the Financial Times, those three economies accounted for 44% of all U.S. steel imports in the first quarter of 2018. U.S. consumers are already paying more for their raw materials than the rest of the world following tariffs announced on other countries earlier in the year, the Financial Times reports. 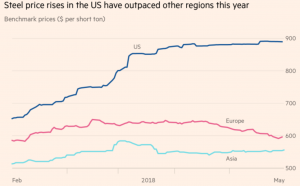 About the only people not complaining are producers (at least here in Europe).

Speaking to sales offices of European producers, there is firm belief little will change except U.S. consumers will end up paying 25% and 10% more for steel and aluminum, respectively. The U.S. does not produce anywhere near enough finished steel or aluminum to meet its massive domestic demand, and you do not bring new rolling or extrusion mills online in months — it takes years.

So, imports will continue to flow and consumers will just pay more. Admittedly, there will be a short-term blip; U.S. consumers have been buying ahead of the curve. One aluminum mill interviewed by MetalMiner confirmed its normal 3,000 tons of monthly sheet sales has been running at 8,000 tons recently in an effort by consumers to stock up ahead of a possible tariff. That stock will carry over into the summer, but if tariffs are still in place Q3 deliveries will resume as before, just at higher delivered prices.

Meanwhile, Mexico has already hit back with retaliatory tariffs against U.S. products. The Financial Times reports a Mexican minister saying, “Given the tariffs imposed by the US, Mexico will put in place equivalent measures on a range of products including flat steel . . . legs and shoulders of pork, sausages and other food preparations, apples, grapes, blueberries, and various cheeses, among others.” Sen. Patrick Toomey (R-Pa.) pointed out that the tariff on Mexico is particularly bizarre, as the U.S. runs a trade surplus on steel with Mexico.

Although European politicians have howled with fury at the imposition of the tariffs, it has to be said there appears to have been scant progress on talks over the last month aimed at avoiding a crisis.

The U.S., trying to negotiate on a range of bilateral trade terms, has argued that U.S. tariffs on European cars are much lower than E.U. tariffs on American cars – a seemingly unfair situation that as an observer is hard to see how it could be justified.

Never let it be said, though, that logic gets in the way of European Commission President Jean-Claude Junker. After calling the move “protectionism, pure and simple,” he reiterated retaliatory measures listed in a 10-page document published in March, which included Kentucky bourbon and Harley-Davidson motorcycles.

In reality, the E.U. has more to lose than the U.S. in a full-blown trade war. Although Germany’s exports of steel products are in a low single-digit percentage of German steel industry output, the country is a major exporter of automobiles and machine goods. Of all the countries in the E.U., Trump probably has his eyes set on Germany’s massive trade deficit with the rest of the world as much as he does the E.U. as a whole.

Still, where this goes from here is anyone’s guess. If either side blinks first and shows willingness to negotiate rather than ratchet up the stakes, then there is a chance a trade war can be avoided.

A trade war is not what either side wants, but it is a risk Trump has shown he is willing to take.