[Editor’s Note: This is the second part of our three-part series on how tariff impacts — positive or negative — are perceived, the history of Section 232, and China’s role in the global steel marketplace (and how that has affected the U.S.). In case you missed it, Part 1 can be read here.]

MetalMiner conducted an analysis of every single Section 232 case initiated since the passage of the Trade Expansion Act of 1962. The results suggest market observers need to dig into the details further to see why various presidents have taken action on imports of particular commodities, as well as what types of action they have taken. 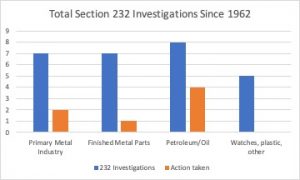 Of the seven times in which a primary metal industry initiated a Section 232 investigation, in only one case — this most recent one — did the president determine action was necessary to adjust imports. However, in one of the cases, President Ronald Reagan agreed to update the National Defense Stockpile.

Of the seven times in which a derivative metal industry (nuts, bolts, bearings, parts) initiated a Section 232 investigation, in no cases did the president conclude action was necessary to adjust imports. However, in one case, for metal cutting and metal forming machine tools, Reagan deferred a decision on Section 232 and instead sought voluntary agreements with foreign suppliers; indeed, one went into effect for a period of five years and was extended for two additional years.

The U.S., however, is not steel independent, meaning the U.S. does require some level of imports to satisfy domestic demand.

Historical analysis suggests the U.S. has filed about the same number of anti-dumping cases today as it did in the late 1950s-1970s. The difference today, though, comes down to the imposition of duties; far more are implemented today than during that earlier time period.

Logically, as tariffs have steadily declined, imports have grown, while today the number of products targeted for anti-dumping measures has declined since the 1980s.

What Has Changed and Why Should Anyone Care?

In a word: China. 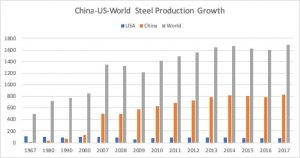 Perhaps the more interesting statistic to examine is production against demand. By looking at the production figures above, one might assume that demand also steadily increased since 2007. 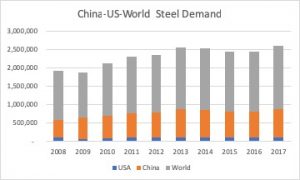 2018 statistics show China produced more steel than any year in its history — 923 million metric tons, according to Reuters, against a demand projection that is at best flat to slightly up from 2017, based on a MetalMiner analysis. Assuming demand of 780 million tons, that would suggest a surplus of over 140 million metric tons.

It should come as no surprise that the Trump administration has taken significant steps to shore up the domestic industry against Chinese imports.

The only study that takes into consideration these factors, such as actual demand and actual supply, involved the original Department of Commerce studies on Section 232.