Aluminum is in Deficit, but Prices Don’t Reflect Any Shortage

The aluminum price has been fluctuating between around $50/ton above and below a median of $1,900 for several months now.

There is considerable uncertainty as to where it is going to go in 2019, yet some commentators, such as ING Bank, are predicting prices will hit U.S. $2,250/ton by the end of the year on the back of constrained supply.

Of course, we should define what we mean by constrained supply.

There are two aluminum markets: one in China and the other being the rest of the world. They no longer operate quite in parallel universes as Alcoa’s ex-boss Klaus Kleinfeld once suggested, their intersection being Chinese exports of semi-finished metal – that metal that both exists within the Chinese market and the rest of the world.

How that volume of semi-finished exports varies tells us a lot about the state of the Chinese and global markets.

Although lifted by record November exports, the January-November figure is up 20.2% from a year earlier, to 5.28 million tons. That figure is on track to hit almost twice the total production of the world’s largest producer outside of China: Rusal.

Much of Rusal’s production is primary, of course, and China’s exports are semis. However, semis flooding the Southeast Asian and wider markets depresses or replaces local demand for primary metal, so the comparison remains valid.

China’s exports are often not given the attention they deserve as a dynamic in the global aluminum price.

In Asia, premiums have also been weaker. 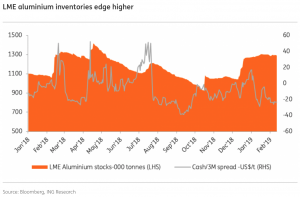 Meanwhile, cost pressures have eased with fears of disruption from Rusal’s alumina refineries now removed and an expectation that Norsk Hydro’s Alunorte refinery could be back to full production in the first half, reducing supply-side fears.

At the same time, China has moved from being a net importer to a net exporter of alumina. As a result, alumina prices have fallen from levels as high as U.S. $640/t over parts of 2018 to around U.S. $370/t currently. The alumina/aluminium price ratio has also fallen from a peak of 31% in September 2018 to 19% currently.

Even so, according to U.S. producer Alcoa’s advice last week reported by Reuters, at current prices some 30-40% of the world’s smelters are losing money, which explains why supply-side primary metal growth flatlined in the second half of last year. Even Chinese smelters reacted to the low price environment. 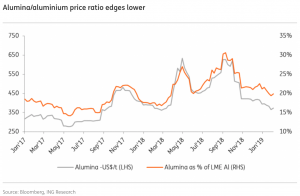 Under the circumstances, ING’s $2,250/ton looks optimistic for the year end. As with every prediction this year, that has to come with the caveat that it depends what happens to trade talks, as so much expectation on the direction of global GDP growth appears to depend on that issue.

The longer uncertainty goes on, the more of a drain it will be on investment and the potential for continued positive growth in H2 and next year. For now, the U.S., China, emerging markets and even Europe appear to remain in positive GDP growth mode (although it has to be said, Europe’s numbers are meager).

Positive demand growth and continued constrained supply suggest a lift in prices this year is in the cards. However, rising Chinese exports remain a worry.

If the domestic market is not absorbing this tonnage and the SHFE price remains depressed due to oversupply then the deflationary impact of those exports is unlikely to simply go away.