Looking Ahead, Part 1: A Surprising Outlook for Steel Prices in 2020

According to Bank of America Research Analyst Timna Tanners, Steelmageddon looms on the horizon due to massive planned capacity increases in the U.S. steel industry.

Her analysis indicates the equivalent of around a 20% capacity increase when aggregating investments across companies and production methodologies over the next few years. Due to the massive ramp-up, the Steelmageddon theory predicts 2022 or so as the time when we may see greatly suppressed prices, and therefore rampant mill closures, due to a steel supply glut in the U.S.

Meanwhile, in recent years, the Chinese government policy for the steel industry focused on capacity reduction and shutting down outdated plants. These closures resulted in an estimated reduction of 300 million metric tons of China’s steelmaking capacity.

In addition to these outdated blast furnace steelmaking facilities closing during the past few years, others still in operation face ongoing production restrictions during pollution alert periods. While some outdated capacity closed, other facilities with the latest technology brought new capacity onstream.

This “upgrade strategy,” if we could call it that, could have profound ramifications.

Others have noted that China may become even more of a competitor as that industry expands into higher-tech areas — the domain of the U.S., Japan and Europe — such as in harder alloys like those used by aerospace and defense, as pointed out by MetalMiner’s Stuart Burns in 2017.

So will the case of Steelmageddon transpire such that China continues to overproduce despite moving into higher value-added steelmaking production while the U.S. fails to curb inefficient production? We will come to that point in a moment.

First, let’s take a look at some background information.

In terms of recent monthly numbers, global crude steel production came in at 146.7 million tons in January, a 1% year-on-year increase over January 2018, according to the World Steel Association.

After a couple of weaker years in terms of production growth, total global production began to increase again in 2017.

In fact, China’s steel output has continued to rise unabated, albeit in an annual cyclical pattern: 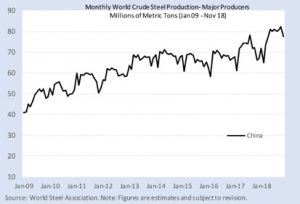 As of January 2019, various estimates peg China’s steelmaking capacity at 908 million tons, according to Reuters. In 2017, China produced 832 million tons of steel, a record production year.

There is some debate over how much new capacity will actually come online in the U.S. during the next several years.

The Steelmageddon analysis estimates total new or restarted U.S. capacity increases at between 17 million and 22.8 million metric tons, while other analysts use more conservative estimates. Most of the new production coming online comes from electric arc furnace (EAF) production methods. However, a couple of projects entail reopening blast furnace operations previously closed, although most of the restarts of older facilities following the 2009 downturn already happened.

With both the U.S. and China working on updates to capacity, the market should expect that some older, less competitive U.S. mills may face closure.

On the other hand, those that remain open likely have greater technology capabilities and greater production flexibility. For instance, in a high-tech production scenario, not all producers will face doom if they cannot compete on scale. Smaller production batches with greater customizations become possible as facilities upgrade.

According to Reuters, cooling demand in the areas of property, automobiles and the energy sector within China could result in lower overall production figures in China this year, down to 900 million tons.

However, at the end of February, steel inventories fell by around 2.9% from Feb. 20, registering at 14.28 million metric tons among CISA members.

With global steel production continuing to increase against a backdrop of internal economic weakness for China, prices could remain suppressed during 2019.

A Look at Imports and Exports

According to China’s General Administration of Customs (GACC), exports of steel reportedly increased over January-February by 12.9% year on year.

Exports of articles of iron or steel constituted China’s ninth-largest product export group worth an estimated $65.6 billion in 2018, or 2.6% of total Chinese exports during the reporting period, as reported by the website World’s Top Exports.

The U.S.’s use of imported steel mill products including China (excluding semi-finished imports), still represents a fair share of total use, but fell during the past year or so according to a U.S. trade report from January 2019. That report estimated 2018 total import penetration at 22.4% based on available data estimates from the American Iron and Steel Institute.

The market still faces an oversupplied situation that will keep prices flatter globally as China continues to seek outlets for steel. Last year, many countries reported production decreases. The U.S. itself only absorbs a small percentage of Chinese exports.

Price weakness could continue through 2019. Recent price gains for both China and the U.S could go away if recent economic numbers prove more than a blip for China’s domestic economy.

If the dollar continues to strengthen this year, steel prices could feel the impact due to the strong negative correlation between the strength of the dollar and steel prices.

[Editor’s Note: This is the first of a two-part series. Part 2 will be published Thursday, March 21.]