The Construction Monthly Metals Index (MMI) moved up one point to to 83, up from 82 the previous month. 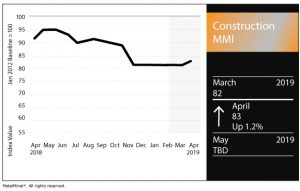 According to the U.S. Census Bureau’s monthly construction spending report, U.S. spending in February reached $1,320.3 billion, up 1.1% from the revised January spending estimate of $1,307.3 billion.

After a hot January, billings growth slowed in February, according to the monthly Architecture Billings Index (ABI) report from the American Institute of Architects.

The February ABI came in at a value of 50.3, down from 55.3 in January (the strongest value in over two years). An ABI value above 50 indicates billings growth.

Despite relatively minimal growth in February, the report indicates stronger billings growth may be on the horizon, if project inquiry levels are any indication.

“However, scores for both inquiries coming into architecture firms and new design contracts continued to reflect healthy growth rates,” the report states. “With sustained improvement in inquiries for future projects as well as new project activity, billings are expected to improve in the coming months.”

While billings growth remains on the positive end — despite it being less robust in February — concerns are mounting about the prospect of an economic downturn, not just in the U.S. but in major economies around the world.

Auto sales dipped in the first quarter of 2019, while U.S. housing starts were down 8.7%

This month’s ABI survey polled industry members about the economic indicators they most frequently look to for guidance on the general direction of the business climate. According to the report, 25% of respondents said interest rates, while 24% said stock market trends and 23% said business confidence scores.

As previously noted, U.S. housing starts fell 8.7% in February compared with January data, according to a recent joint report by the U.S. Census Bureau and the Department of Housing and Urban Development (HUD).

The next housing starts report is scheduled to be released April 19.