2020 should continue to see global growth — maybe even a recovery

Despite a somewhat chaotic year, with markets buffeted by trade wars and geopolitical risks, the global economy has continued to expand (albeit at a slower pace than previously).

The market’s reaction to media coverage of trade wars has no doubt been a factor in depressing share price performance and, more importantly, to postponing investments that would otherwise have stimulated more significant growth.

Economic growth in some regions has undoubtedly been hit by the knock-on effects of the trade war.

China has arguably been hit the hardest, but the drop in consumption there has spilled over into major suppliers of luxury goods, autos, and machinery — such as Germany.

But a recent Stratfor report paints a more promising picture for 2020, suggesting a combination of factors should see a gradual recovery. 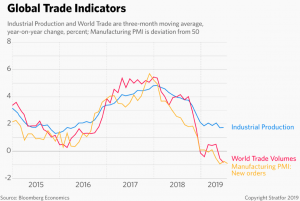 The recovery would — indeed, could — be much stronger but for politicians’ unwillingness to use fiscal stimulus in some countries.

Again, Germany leads the pack here, as a deep-seated commitment to always balance the budget philosophically prevents them from using fiscal stimulus, even though it would be of considerable benefit — not just to Germany but also its neighbors in the E.U.

By keeping growth sub-optimal in Germany, growth remains anemic across much of the E.U. Stratfor predicts 1% growth for 2020. Only the U.K. may manage better, now that it has settled its political infighting and the re-elected Conservative government budgets for substantial infrastructure investment, said to be £100 billion over the next five years.

Europe is not alone in having limited fiscal firepower to boost growth. As Stratfor observes, emerging markets are also set for a difficult 2020.

Argentina will be mired in an economic crisis, the Stratfor report says. Brazil and India will each struggle to make the structural reforms necessary to resume higher levels of growth. The Turkish economy, driven by unsustainable levels of stimulus, may continue its slow recovery — but no quick acceleration is likely.

Meanwhile, developed markets have no capacity to cut interest rates and limited appetite for quantitative easing along the lines employed following the financial crisis.

It is to be hoped that with the upcoming 2020 elections, President Donald Trump will make resolving trade disputes a key goal.

The United States-Mexico-Canada Agreement (USMCA) is expected to be approved by Congress after the White House and House Democrats recently reached an agreement over revisions.

Meanwhile, the U.S.-China trade war is showing some encouraging signs of a thaw but still has a long way to go. U.S.-E.U. discussions probably have a lot of disappointments in store before a deal is struck.

Broadly, though, progress in these areas should reduce tensions and encourage investment. Stratfor makes the point that the impact of these disputes is waning (see the graph below): 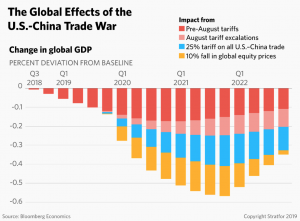 As time goes by, the status quo becomes the new normal and firms find a way to cope. If this is correct, it means 2020 should be less disrupted than 2018-2019 has been and offers the prospect of continued growth — maybe not strong growth, but certainly positive.

After 10 years of a bull market, that’s probably the best one can expect from a late-cycle growth curve.