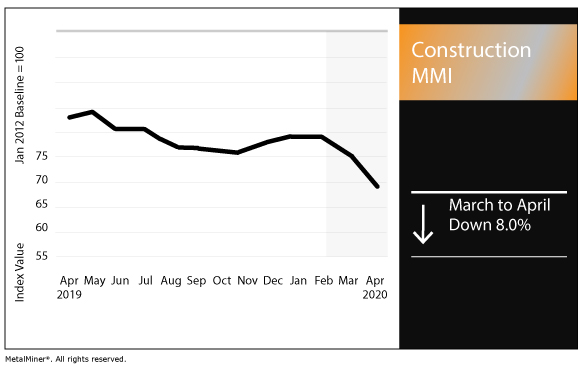 However, the February spending figure marked a 6.0% increase compared with February 2019 spending.

Robert Dietz, chief economist for the National Association of Home Builders, analyzed the impact of the coronavirus outbreak and the tightening of lending standards.

In addition, amid shelter-in-place orders aimed at curbing the spread of the novel coronavirus, potential home buyer traffic has already taken a hit, according to NAHB survey data.

“In NAHB survey data from this week, potential buyer traffic ranked as the most immediate concern, with 69% of builders indicating major declines,” Dietz wrote. “89% of remodelers noted that home owners cited concerns about interacting with workers and crews. Several more issues surveyed worsened this week. For example, the percentage of builders who cited an increase in delays of single-family permit approval increased from 57% to 80%. Building inspection delays increased from 50% to 78%. Multifamily concerns are rising about rent payments as well.”

After slumping through the early part of 2019, architecture billings have showed steady growth over the last six months.

In February, the Architecture Billings Index (ABI) — released monthly by the American Institute of Architects — posted a reading of 53.4, marking the sixth straight month of billings growth (any reading greater than 50 indicates billings growth).

The ABI registered at 52.2 in January.

“The Architecture Billings Index (ABI) score of 53.4 for the month reflected the strongest growth in billings at firms over this six-month period, demonstrating a healthy start to the year through the first two months,” this month’s ABI report stated. “Project inquiries and new design contracts also showed healthy gains, although both grew at a slower pace than in January.”

Infrastructure spending in the age of the coronavirus

With the economy under stress from the coronavirus outbreak, one area for potential revitalization lies in the infrastructure sector.

House Speaker Nancy Pelosi had previously been supportive of tackling infrastructure needs in subsequent coronavirus-related stimulus packages but appeared to take a different tack in a CNBC interview Friday.

“While I’m very much in favor of doing some things we need to do to meet the needs — clean water, more broadband, the rest of that — that may have to be for a bill beyond this,” Pelosi was quoted as saying by The Hill.

With the focus on the worsening health crisis and increasing rates of infection as testing has ramped up, infrastructure’s place in any future coronavirus stimulus packages remains to be seen, even if infrastructure improvement is broadly considered a bipartisan issue.

“With interest rates for the United States being at ZERO, this is the time to do our decades long awaited Infrastructure Bill,” Trump tweeted March 31. “It should be VERY BIG & BOLD, Two Trillion Dollars, and be focused solely on jobs and rebuilding the once great infrastructure of our Country! Phase 4.”

Perhaps the gravity of the current pandemic, from the health crisis to the resulting deleterious impact on employment levels, will inspire big-picture thinking with respect to tackling a wholesale overhaul of America’s infrastructure.