“There’s (still) copper in them there hills” — maybe that should be the catchphrase on the lips of small-cap miner Strongbow Exploration and its partner Cornish Lithium.

While prospecting for lithium brines in Britain’s extreme southwest county of Cornwall, Cornish Lithium’s initial boreholes hit big — not just in lithium, but for copper, too.

The lithium brines were indeed present at some 500 meters down and deeper, an article by ProactiveInvestor reports. 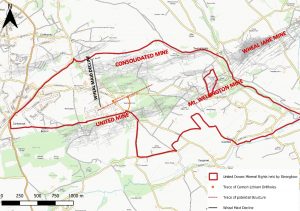 The copper find should not come as too great a surprise.

The drill site is smack dab in the middle of venerable old mining sites, such as United Mines, the Wheal Jane Mine and the Consolidated mine — sites that have delivered up not just copper, but also tin and zinc for centuries and at one time made Cornwall one of the preeminent mining areas in the world.

The last of those mines was closed back in 1987, when cheaper to operate large open-pit mines did away with labor-intensive underground sites that seemed to have largely exhausted their richest seams.

But Cornish Lithium’s find ranks as world-class — at least in terms of grades, the article states.

The bore results suggest a band of 14.69 meters grading 7.46% copper and 1.19% tin at a depth of just over 90 meters. Strongbow’s chief executive, Richard Williams, advises rolling in the tin and the zinc to make a copper equivalent grade bringing the overall hit up to a mighty 10%. According to GlobeNewsWire, some of the samples showed up to 26% copper, with several over 20%. Meanwhile, tin was up to 7.26%, with many samples over 1%.

To put that into perspective, discoveries boasting grades of less than 1% have widely been seen as economic in the recent past (at least for surface mines). The world’s highest grading copper mine, at Las Cruces in Spain, only runs a reserve at 5%, with the grade dropping further in the resource category to just 1.8%.

Meanwhile, Glencore’s KOV mine, which is much larger and ranks as the world’s second-highest in terms of grade, rings in at 4.2% in reserves and 4.6% in resources.

Strongbow is keen to point out one or two drill holes do not a mine make. Much more extrapolation and further drilling needs to take place.

But for the first time in over 30 years, Cornwall appears like it may have a multimineral deposit of commercial significance – copper, tin, and zinc at a shallow 90-100 meters and lithium salt brines at 500-plus meters in the same area, allowing for multiple revenue streams to cover costs.

The area desperately needs jobs and mining work would be well paid and long term once the investment is lined up and committed. It raises the question: has Cornish Lithium just struck lucky with its initial drilling or does the area offer further mineral riches still to be found?

Maybe modern technology can find resources that the old miners had thought worked out.