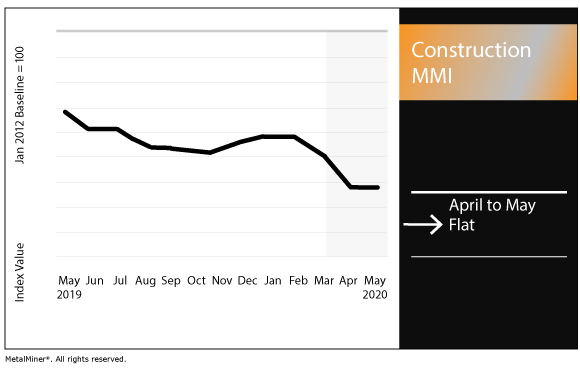 In other construction news, U.S. housing starts reached a seasonally adjusted annual rate of 1,216,000 in March, which marked a 22.3% decline from the previous month but a 1.4% increase compared with March 2019.
Single‐family housing starts checked in at a rate of 856,000, down 17.5% from February.
The March rate for units in buildings with five units or more came in at 347,000.

The Architecture Billings Index (ABI), released monthly by the American Institute of Architects, showed significant contraction in March.
The ABI checked in at 33.3 in March, down from 53.4 the previous month (anything greater than 50 indicates billings growth).
“This is by far the largest single month decline the index has seen in its nearly 25-year history, far surpassing the declines of 9.4 points seen at the start of the 2001 recession and 8.3 points seen at the start of the Great Recession,” the AIA said in its monthly ABI release. “It reflects just how quickly and fundamentally business conditions have changed across the country and around the world in the last month as a result of the COVID-19 pandemic.”
By region, the Northeast was hit hardest, tallying an ABI of 38.4. The South and Midwest both came in at 44.2, while the West recorded a reading of 45.3.
This month’s ABI survey question asked firms to assess the impact of the COVID-19 pandemic on their operations.
“When asked now to project their firm’s losses through the end of the second quarter of 2020 (April-June), 94% of responding firms indicated that they expect a decline in revenue during that time, with more than one third of anticipating losses of 25% or more,” the report stated. “On average, architecture firms now expect revenue losses of 17% over the next three months.”
Lower your metal spend. Trial MetalMiner’s monthly metal buying outlook now.