The worst outbreaks have largely been in advanced economies and many developing countries, such as those on the continent of Africa, are so far coping remarkably well.

In Brazil’s case, it is because the federal government has refused to acknowledge the country even has a problem. India, meanwhile, reacted swiftly but has struggled with a woefully underfunded health care system and fundamental errors in how the government handled migrant workers. Overlay those issues on crowded cities — in which populations live cheek by jowl with neighbors and often in large family units — and the opportunity for transmissions is high.

Given the above, it is a surprise infection rates are not higher, although it has to be said data is sketchy and underreporting a near certainty under the current lockdown conditions (said to be some of the most severe in the world).

It is surprising, therefore, that faced with such a huge threat and coping with woefully insufficient data, the government is easing lockdown restrictions while infection rates are still rising.

The Financial Times reports India’s coronavirus infection and death tolls still lag well behind the U.S. or in western Europe, though it has overtaken China with more than 90,000 confirmed cases. The curve of new infections has also not flattened despite nearly two months of nationwide lockdown and raises the question as to what an easing of the lockdown will bring. 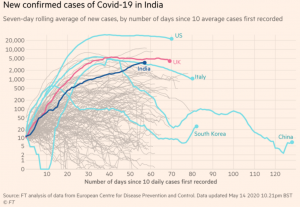 To be fair, a traffic light system designates districts by infection rates and conditions are only being eased in districts with green or amber – meaning no or low levels of infection.

Red districts, such as Mumbai in Maharashtra and large parts of neighboring state Gujarat, are still seeing rising numbers. The Financial Times paints a dire picture despite the government’s earnest attempts to contain and treat the population.

Mumbai is a notoriously crowded city with widespread poverty. Some 40% of the population is said to live in slums, with Dharavi, at 800,000 residents the city’s largest slum, seeing alarming outbreaks.

Social distancing is impossible and residents are already breaking curfew orders to get out of sweltering shelters as the summer heat approaches its peak.

The government’s haste to lift restrictions is understandable, as the economy is contracting violently.

Goldman Sachs had estimated India’s growth would shrink 20% in the June quarter but has just revised that figure to 45% in the June quarter and projected a 5% fall in gross domestic product (GDP) for the full 2020-21 financial year, saying it will be the deepest fall India has ever suffered. Goldman Sachs said restarting economic activity during the extended lockdown continues to pose challenges, especially in red zones, which comprise approximately 45% of GDP.

Migrant workers needed to operate factories have largely now returned to their villages after spending agonizing weeks in limbo, stranded in cities with inadequate food and accommodation, which exacerbated virus transmissions. Now that they are home, many will struggle to get back into red zones to return to work and even more fear of the consequences if they do.

Indian supply chains, at least for some industries, have continued to operate well with the rest of the world.

Exports of aluminum products have held up well and while there have been paperwork and banking issues, the larger exporters have managed to cope well.

Even so, India’s exports contracted by a record 60.28% to USD 10.36 billion in April, according to Timesnow.com, official data showed Friday.

How India manages to return to work with a still-rising infections curve remains to be seen. India is the first country to try such a move on a large scale.

With the approaching monsoon season and accompanying rise in dengue fever and malaria next month putting pressure on the health care system, India’s challenges remain severe.

PREVIOUS POST:
Stainless price rises offer a hint of support for nickel
NEXT POST:
This Morning in Metals: EIA estimates fuel inventory to build by 11.5M b/d in Q2