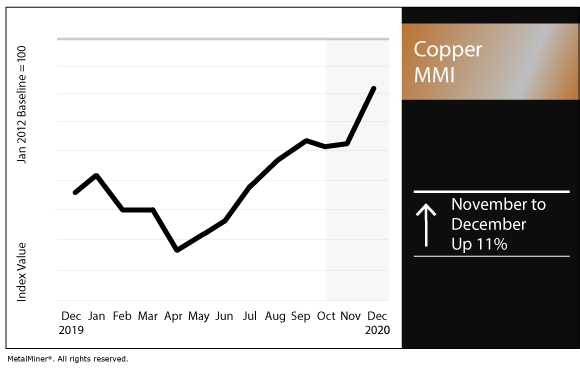 On Nov. 19, the Shanghai International Energy Exchange (INE), a subsidiary of the SHFE, started trading new bonded copper futures contracts. This contract addresses the second of “two” spot markets for copper — the tax-included domestic market currently supported by the dollar-denominated SHFE contract and the on-shore “bonded facility” market based in Shanghai to be denominated in RMB.

Not only does this create a new risk management tool for copper buyers, but it suggests China is now moving toward fulfilling its “dual circulation” strategy and bringing its currency more fully into the global market.

The new product aims to establish pricing power over the London benchmark, as China is the world’s largest copper consumer and copper remains one of the world’s most-traded base metals.

Many analysts in the region do not expect the INE copper price to become a regional benchmark for many years and only after investors overcome their conversion concerns regarding the yuan.

China continued to import a record amount of copper. Demand remains strong in the short term. China’s Caixin General Manufacturing Index continued its upward movement, increasing to 54.9 in November up 1.3 points from October.

This was the highest reading since November 2010, as both manufacturing output and new orders increased the fastest in over a decade. Moreover, there are rumors that the country is stockpiling. In October, China imported 618,108 metric tons of unwrought copper, according to the General Administration of Customs. Bringing the year-to-date total to 5.6 million metric tons, up by 41.4% compared to 2019 imports.

Another reason why China might be stockpiling could be the resurgence of COVID-19 cases. The copper market currently faces a concentrate deficit. The International Copper Study Group (ICSG) forecast estimated mine output to decline by 1.5% in 2020 as a consequence of lockdowns that reduced production in major producer countries like Peru. This could mean China is preparing itself for a further copper shortage.

While China is the world’s biggest copper consumer, the price uptrend is also largely supported by green energy spending in developed markets.

Analysts at Goldman Sachs anticipate that spending on green infrastructure could be as significant in other large markets, such as Brazil, Russia and India. They expect “a large boost to consumer spending, comparable to the lending-fueled consumption increase in the 2000s.”

Moreover, in the U.S., presumed President-elect Joe Biden is expected to spend billions on renewable energy. Meanwhile, the European Union already agreed to spend nearly 550 billion euro on the green project as part of their economy recovery plan.

PREVIOUS POST:
Industrial metals prices performing well
NEXT POST:
This Morning in Metals: $2 trillion in infrastructure, green policies seen as boon for metals; Why China is binging on aluminum imports