The Construction Monthly Metals Index (MMI) jumped by 12.1% for this month’s reading, as construction spending picked up in March. 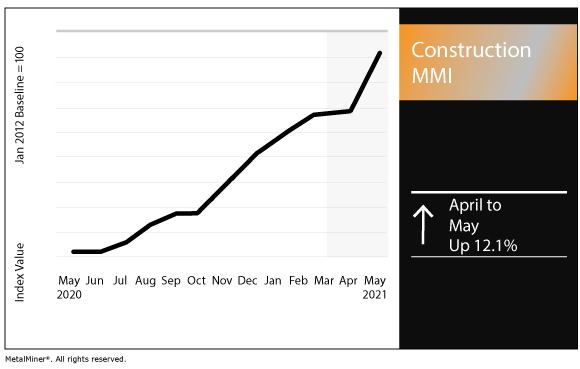 The Architecture Billings Index (ABI), released monthly by the American Institute of Architects, had fallen for 11 consecutive months until a two-month upturn in February and March.

The March ABI checked in at 55.6, up from 53.3 in February. (Any reading greater than 50 indicates billings growth.)

Meanwhile, the design contracts index registered a reading of 55.7, up from 51.6.

“Business conditions at architecture firms continued their turnaround in March, with a strong ABI score of 55.6 for the month (a score over 50 indicates billings growth), as an even larger share of firms reported an increase in their billings than in February,” the ABI report indicated. “In addition, inquiries into new work and the value of new design contracts both continued to rise, as an increasing number of clients are not only shopping projects around, but also signing contracts to begin new work.”

Illustrating the ongoing economic recovery, the ABI report notes backlogs at firms jumped from Q4 2020 to Q1 2021, rising from about 5.3 months to 6.1 months.

“This is nearly back to the pre-pandemic peak of 6.5 months and means that firms have a solid supply of work in the pipeline if the economy falters in the coming months,” the report added.

In the housing market, pending home sales picked back up after two straights months of declines.

Construction employment down in 203 metro areas

The Associated General Contractors of America, in an analysis released last month, reported construction employment from March 2020 to March 2021 fell in 203 metro areas.

“Nearly twice as many metros have lost construction jobs as gained them in the past 12 months, even though homebuilding has recovered strongly and the overall economy is in much better shape than it was a year ago,” said Ken Simonson, the association’s chief economist. “Nonresidential construction is still at risk of further declines in much of the country.”