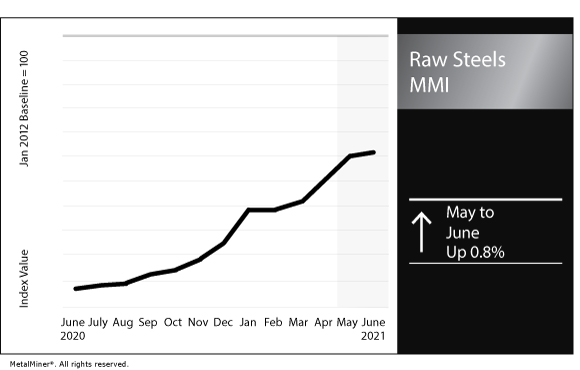 Steel demand in China increased in the past few months as the government implemented its economic recovery plan, which includes infrastructure spending. Increasing steel prices continue to bring up infrastructure costs.

On May 26, steel prices saw a price drop of approximately 20% for all forms of steel. The sudden price decline in China could have been triggered by the severe punishment the Chinese government threatened to impose on any excessive speculation and fake news that might inflate critical raw material prices, such as steel.

After Chinese prices corrected, they continued to go up but at a slower rate, closing May at CNY 6,060/mt from CNY 6,100/mt at the end of April. Since, they continued to increase the first week of June but remain below the CNY 6,250/mt level.

However, volumes do not suggest speculation. Rather, the Chinese government wishes to control the rising price situation. After all, a lower domestic price can help boost the competitive advantage for Chinese firms exporting value-added products.

As mentioned above, the Chinese government is working to lower domestic steel prices to boost its competitive advantage.

On May 1, the Chinese government canceled tax rebates to keep more steel in the domestic market and limit domestic crude steel output. However, Chinese steel remains at a discount to overseas markets.

Traders in Europe appear to be buying large volumes out of China at the moment, regardless of China’s cancelation of its export tax rebate, as steel from there is cheaper than that rolled in Europe.

Steel prices in the U.S. jumped over 10% month over month for HRC, CRC and HDG.

Due to the lack of spot steel, production saw a lower-than-usual capability utilization rate and several key sectors ramping up their steel demand. Prices continue to rise while lead times expand.

Spot steel is so scarce that U.S. service centers are reportedly selling at a $200/st-$300/st premium over the spot price to secure raw materials.

According to an antitrust lawsuit filed June 8, JSW Steel alleges that since 2018 executives from Nucor, U.S. Steel, AK Steel, and Cleveland-Cliffs conspired against them by refusing to sell raw metal to its U.S. pipe and plate-making operations.

JSW said it was unable to get enough semi-finished steel slab from suppliers outside of the U.S. following the 2018 tariffs imposed by the Trump administration. JSW alleges that due to this refusal, they were forced to solely buy at higher prices than the already record-high domestic prices, leading to the rise of its operational costs. U.S. Steel, Nucor, and Cleveland-Cliffs control more than 80% of domestic steelmaking capacity.

PREVIOUS POST:
Is Brexit Britain for free trade or protectionism?
NEXT POST:
This Morning in Metals: China auto sales fall 3.1% year over year in May