Tata Steel Europe is eyeing a refractory reline of one of the two blast furnaces at its IJmuiden works (Tata Steel Netherlands) in 2022, a source close to the company told MetalMiner. 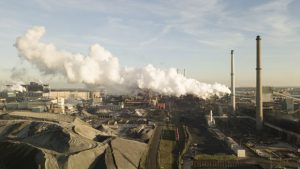 He declined to say either which of IJmuiden’s two furnaces – BF 6 or BF 7 – would undergo a refractory reline or when in the year. He noted the company needs to speak with customers to determine their needs before deciding when exactly to blow down.

A blast furnace must continuously operate in campaigns, which normally last 15-20 years as deactivating it can create cracks in the refractory lining. Even when not on stream, blast furnaces must maintain a certain temperature to keep their refractories’ integrity.

Campaigns can also be as long as 30 years in some cases.

Pre-engineering work for the refractory reline at IJmuiden is now under way, the source said. The source added that this could include producing needed parts and acquiring necessary supplies.

“Many of these items you have to order months or even years in advance,” the source added.

The plant produced 6.2 million metric tons of crude steel in the financial year ending March 31, 2021. That marked a drop of 8.8% from 6.8 million metric tons in the previous year, parent company Tata Steel Group stated in its annual report released in May.

Further east, flats producer ThyssenKrupp Steel (TKS) is now relining one of its four blast furnaces at its Duisburg site in a project that is to last through September, a spokeswoman for the German steelmaking group told MetalMiner.

Work to reline blast furnace No. 1 started in July as the furnace had ended its campaign of 15-20 years, the spokeswoman said.

She referred to the work as a “partial reline,” however, as the furnace’s body is due to remain intact.

The spokeswoman did not specify how much the refractory reline work would cost, but noted that “the investment for the project amounts to a medium double-digit million euros amount.”

PREVIOUS POST:
What does the IPCC report mean for metals markets, industries?
NEXT POST:
Raw Steels MMI: Steel demand on the rise