The Automotive Monthly Metals Index (MMI) fell by 1.4% for this month’s MMI reading. 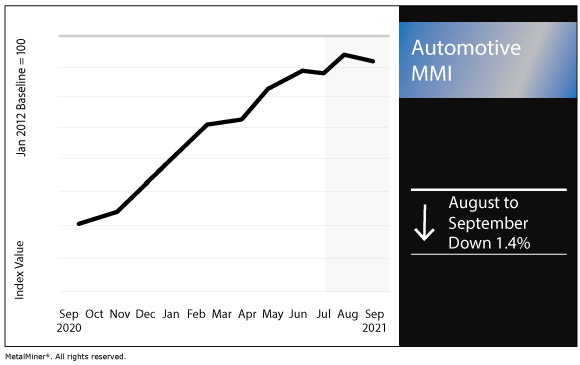 However, retail sales declined by 39.6% on a year-over-year basis. Total sales fell by 33.1% year over year.

“Electrified vehicle sales were up 67.3 percent over last year for a total of 8,756 vehicles,” Ford said. “Electrified vehicles are bringing in new customers to Ford at a rate that is more than 8 points higher than Ford’s overall conquest rate.”

Meanwhile, General Motors, which reports on a quarterly basis, in July reported Q2 sales rose by 40%. In a letter to shareholders last month, CEO Mary Barra underlined the automaker’s effort toward achieving zero emissions. In addition, she said GM aims to develop “a full EV portfolio that doesn’t depend on partial solutions like hybrids and ‘electrified’ ICE vehicles.”

In their monthly forecast, J.D. Power and LMC Automotive projected U.S. new-vehicle sales in August would come in down from August 2020 and August 2019 levels.

Insufficient inventory exacerbated by the ongoing semiconductor shortage has put a cap on sales.

“The month of August is historically a peak selling month as manufacturers launch promotional events to clear inventories of outgoing model-year vehicles and begin sales of the new model year,” said Thomas King, president of the data and analytics division at J.D. Power. “This year, however, the industry has insufficient inventory at dealerships to meet strong consumer demand. The consequence is that the retail sales pace is depressed, but transaction prices are elevated.”

“Even with retail volumes being suppressed by supply constraints, the record high transaction prices mean that consumers are on track to spend $40.8 billion on new vehicles this month—the fifth-highest on record for the month of August—ending eight consecutive months of record year-over-year consumer expenditures levels,” King added.

According to the China Association of Automobile Manufacturers, auto sales in China fell by 11.9% year over year in July.

The drop marked the third consecutive month of sales declines.

Passenger car sales dropped by 7.0% year over year and by 1.1% from the previous month.

The major throughline of 2021 for the automotive sector has been the semiconductor shortage, which has thrown a wrench into automakers’ operations. The modern vehicle needs chips and, right now, there simply aren’t enough of them.

Chips are needed for a variety of other capacities, too. As such, the U.S. Department of Defense is looking to bolster the U.S.’s position in the space.

In relevant news for the domestic market, the Department of Defense has awarded an agreement to Intel through which the latter will help develop a commercial semiconductor foundry ecosystem.

The move is part of the first phase of the DoD’s Rapid Assured Microelectronics Prototypes – Commercial (RAMP-C) program.

“One of the most profound lessons of the past year is the strategic importance of semiconductors, and the value to the United States of having a strong domestic semiconductor industry,” Intel CEO Pat Gelsinger said. “Intel is the sole American company both designing and manufacturing logic semiconductors at the leading edge of technology.”