The Copper Monthly Metals Index (MMI) rose by 3.5% for this month’s reading. 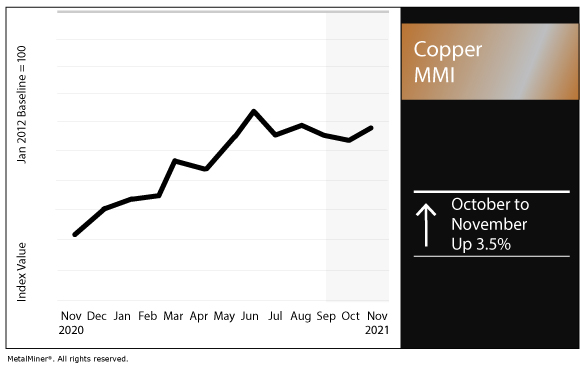 From a technical perspective, prices appear to be trading sideways at a historical resistance level. As such, buyers should watch markets in the coming months for the appearance of a clearer market trend. 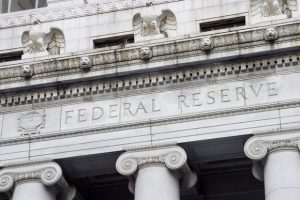 Prices saw a 0.74% increase in one day following the Fed’s announcement that interest rates would remain near zero. Federal Reserve Chair Jerome Powell stated at the subsequent news conference, “We do not think it is a good time to raise interest rates because we want to see the labor market heal further.”

Powell’s statement triggered the S&P 500, the Nasdaq 100, the Dow Jones Industrial Average, as well as the Russell 2000 to close at all-time highs.

Alongside the pause in adjustments to interest rates, the Fed announced it would begin around mid-November to unwind the emergency stimulus measures put in place at the dawn of the pandemic, the Financial Times reported. The $120 billion monthly bond purchasing program is set to be gradually tapered. Purchase of treasury securities will fall by $10 billion per month while purchases of agency mortgage-backed securities will fall by $5 billion per month. The expected end point for this withdrawal is around June of 2022.

Meanwhile, the U.S. dollar dropped by 0.07% following the announcement to pare back quantitative easing from the Fed.

Historically, the strength of the U.S. dollar has an inverse relationship with commodity prices, including copper.

LME inventories continue to sit at a multidecade low as short-term copper contracts remain high. Meanwhile, futures prices fell amid ongoing demand concerns as China. The consumer of roughly half of global commodities, China continues to grapple with its power crisis, an overleveraged property sector and a slowing economy.

This follows a month of record tightness that led the LME to impose numerous measures to restore order in the copper market. After inventories fell to a 47-year low in mid-October, the exchange announced temporary rule changes “to maintain continued market orderliness and avoid the development of an undesirable situation.” Among the changes, the LME limited tom/next backwardation. It also introduced deferred delivery on next-day short positions.

Amid an already tight supply market, production came to a halt Oct. 31 at Antamina, Peru’s largest copper mine, following a blockade created by local protesters that alleged the mine has not sufficiently supported local communities, mining.com reported. This protest comes after a string of demonstrations against mining companies spurred by President Pedro Castillo’s inauguration. President Castillo had pledged in his campaign to negotiate a redistribution of mining profits to support local communities.

By Nov. 3, however, Antamina and representatives of the Aquia community signed an agreement to end protests in exchange for a Nov. 5 meeting between the parties.

Only surpassed by Chile, Peru is the second largest global copper producer.

While price movement tends to be more closely related to the refined market, in a high price environment and with the speculation of very high demand, tightness in the concentrate market can influence overall sentiment.