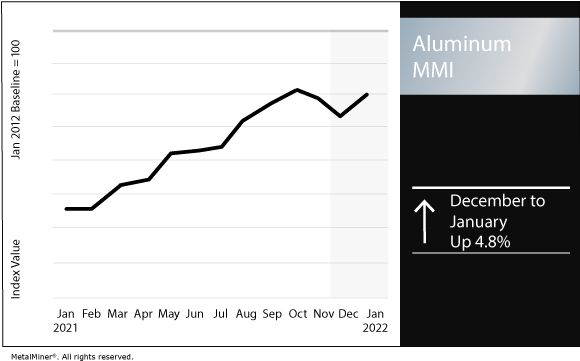 After a sharp 7.6% drop in the early days of November, prices appeared to have found a bottom and formed a bullish “cup and handle” technical pattern around the summer support levels.

Aluminum prices have broken out of the bullish pattern and now seek new resistance levels on the smaller time frames. The October high will serve as the price target on the longer time frame for this newly confirmed price reversal.

The cuts continue to roll in.

Most recently, Norsk Hydro’s Slovalko smelter will drop production to 60%. This cut, which equates to roughly 35 thousand mtpa, follows a previous cut which had lowered production down to 80% in 2019.

Soaring energy prices throughout Europe have eroded smelter profitability. Those smelters that rely upon long-term energy supply contracts and renewable energy, including hydroelectric capacity, have remained largely sheltered from the closures and cutbacks.

As such, Alcoa signed long-term renewable energy contracts for its San Ciprián plant. The plant will still remain closed until 2024. When it reopens, it will receive roughly a quarter of its energy requirements from Madrid-based Capital Energy.

While shipments of U.S. liquefied natural gas to Europe provided some short-term relief, there is no immediate solution to the energy crisis, as gas prices continue to surge. The shipment managed to drop gas spot prices by nearly 40% at the end of last month. However, as Bloomberg reported, forward contracts fell by only 30%. That would indicate the market expects high energy prices and shortages to persist well into the future.

The aluminum sector accounts for roughly 4% of China’s carbon footprint, according to mining.com.

In spite of the cuts driven by surging energy prices and China’s emissions goals, new smelter capacity is on the way.

According to a late December announcement, India’s Adani Group intends to build an alumina refinery and aluminum smelter. The announcement was made upon the incorporation of Mundra Aluminum Limited, although no further details were released.

Indonesia’s PT Adaro Energy likewise intends to construct an aluminum smelter. The coal company’s subsidiary, PT Adaro Aluminum Indonesia, will build a $728 million smelter on the island of Borneo. The company was motivated by high optimism over the future of aluminum demand and will benefit from being located within an industrial park that plans to construct an 11,000-megawatt hydropower plant.

Lastly, Norsk Hydro ASA announced it will add $6.6 million worth of improvements to its Ådral aluminum smelter. Construction will commence in the spring of 2022. The company expects to complete the improvements within the year. The improvements are aimed at plant modernization, plus advancing profitability and efficiency.

Upon completion, the smelter is expected to reduce its energy consumption by roughly 660 MWh per year.