The UK government recently announced an asset freeze on London-headquartered metal and mining group Evraz. Authorities claim that Evraz is receiving benefits or support from the Russian government to conduct business in strategic and economic sectors. True or not, the freeze has broad implications for global steel production.

From steel to copper and beyond, it’s essential to stay up-to-date on the latest metal prices. You can receive all the latest data by signing up for the weekly MetalMiner newsletter here. 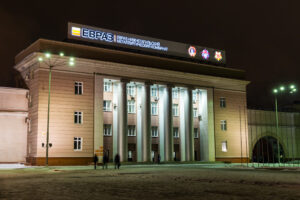 NIZHNY TAGIL, RUSSIA – JANUARY 01, 2014: Night view of the main entrance of the plant NTMK company Evraz. NTMK plant is the main enterprise of the city of Nizhny Tagil

HM Treasury’s Office of Financial Sanctions Implementation (OFSI) went public with the move against Evraz on Thursday, May 5. As in similar situations, the action was filed under the Sanctions and Anti-Money Laundering Act of 2018.

This specific law allows governments to freeze funds and economic resources of problematic persons, entities, or bodies. In this case, it refers to those involved in destabilizing Ukraine or undermining/threatening the country’s territorial integrity, sovereignty, or independence.

Evraz has steel making assets in Russia that include the Nizhniy Tagil (NTMK) and Western Siberia (Zapsib) plants. The OFSI also noted that the company controls coking coal mines in Raspadskaya and Yuzhkuzbassugol and an iron ore mind at Kachkanarsky.

However, the information made no mention of Evraz’s Mezhegeiugol coking coal mine in eastern Siberia or its vanadium production operations.

Freezing the assets of companies like Evraz has played a large role in how Western countries and the EU are punishing Russia for its Feb. 24 invasion of Ukraine. Indeed, back on Mar. 10, the UK’s Financial Conduct Authority officially suspended the group’s shares on the London Stock Exchange.

The earlier move was in response to the national government placing Roman Abramovich on its list of sanctioned individuals. Well known as the owner of Chelsea Football Club, Abramovich holds the single largest stake in Evraz (28.64%).

At that time, Evraz denied any involvement in actions against Ukraine. They have since reiterated claims that they mainly produce materials for construction and infrastructure. 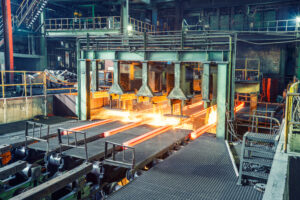 Evraz NTMK poured 4.1 million metric tons of crude steel in 2018, from which it rolled about 4.6 million metric tons of finished product. The manufactured items included rails, long products, rings for mechanical engineering, and grinding balls. According to the group’s website, the plant also produced semis for tubular production.

The OFSI did note that Evraz could continue to operate with its North American subsidiaries. Allotments include “payments to or from those subsidiaries under any obligations or contracts” and “payments to or from any third party under any obligations or contracts.” It also includes the “receipt of payments made by the North American Subsidiaries for audit services.” The OFSI also added that “Evraz North America is permitted to pay for the audit services referred to in the previous sentence.”

One source noted that many Russian companies are trying to put distance between their overseas assets and their owners in Moscow. “Everyone is separating or thinking about spinning off assets abroad into separate divisions,” that analyst added. Only time will tell if their efforts will pay off.

Evraz North America’s headquarters are in Chicago, but the subsidiary has a welded pipe mill in Oregon (Evraz Portland) and a hot end and rail mill in Colorado (Evraz Pueblo).

In total, Evraz North America has six plants spread throughout the United States and Canada. The wholly-owned subsidiary can produce up to 2.3 million metric tons per year of crude steel via electric arc furnaces at Pueblo and Regina alone. The former is located in Colorado, while the latter is situated in Saskatchewan.

Besides having hot ends, the Pueblo plant can roll long products that include rail as well as wire rod and rebar in both coils and seamless pipes. Meanwhile, the Regina plant produces line pipe from its own rolled plate products.

The easiest way to keep yourself informed about major changes in the metal marketplace is MetalMiner’s monthly MMI Report. Sign up here to begin receiving it FREE of charge.