Some would argue the credit rating agencies do not have the best record in making predictions on the future direction of financial markets.

However, they do have considerable resources at their disposal, so when they issue particularly dire warnings, common sense suggests we should pause and consider their analysis.

An article in The Telegraph quotes James McCormack, in charge of sovereign ratings at Fitch Ratings Inc., as saying the agency forecasts the U.S. Federal Reserve base rate could rise to 3.25% by the fall next year, as the Fed doubles the pace of rate rises in 2018 to head off the potential for higher inflation sooner rather than later.

Fitch is forecasting four rate rises this year, double the pace that the markets are currently expecting, The Telegraph reports.

Nor is the rating agency alone — the World Bank said financial markets are the biggest risk to the global economy and that markets are underestimating the turmoil rising rates will cause in the years ahead.

Citicorp analysts are also predicting that tighter monetary policy could spook global markets, part of a growing consensus that a combination for broad-based growing GDP and rising oil prices could accelerate inflationary pressures and hence hasten rate rises faster than the markets are expecting. 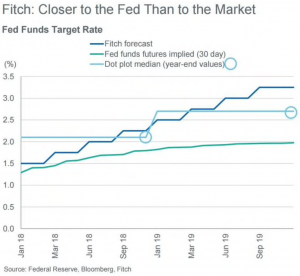 Illustrating how the market is failing to see the seriousness of the situation, McCormack is quoted as saying that so far we have not really seen market rates respond, noting that U.S. government 10-year bond yields remain low. But just last week 2-year government bond yields rose above 2% for the first time since 2008, while 10-year yields have risen to 2.6%. 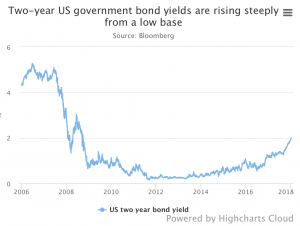 This should be seen against a backdrop in which the Fed is starting to reverse its massive program of quantitative easing (QE), according to another article in The Telegraph last week. Since 2008, the Fed balance sheet has ballooned from under $1 trillion to well over $4 trillion.

In addition to rate rises, the Fed has also indicated it will offload assets bought under QE at a rate reaching $600 billion on an annualized basis by the end of 2018. Fitch does not expect the U.S. economy to be derailed by rising rates. However, as the U.S. market is traditionally seen as the global risk-free benchmark, other debts are priced against its yields, The Telegraph notes. This means that rising rates in the U.S. market could push up borrowing costs across the world, regardless of other central banks maintaining loose monetary policies.

The global debt-to-GDP ratio stands at 332%, some 56 percentage points higher that it was before the 2008 financial crisis. In the U.K., the Bank of England has already halted QE and started to raise rates late last year by 0.25% to 0.5%, with at least one more rate rise expected this year (possibly two). Although the European Central Bank (ECB) and the Bank of Japan continue to pursue ultra-low interest rates and continue with QE policies, the ECB has at least announced it will reduce its monthly bond purchases from €60 billion to €30 billion.

Equity markets do not appear to have caught up with this trend just yet, caught as they are in the grip of a bull market frenzy. At some point, gravity will reassert itself.

It is to be hoped that Fitch’s dire warnings are proved to be overblown, as central banks around the world are ill-prepared for another financial crisis.

PREVIOUS POST:
America is Picking the Right Fight with the Wrong Enemy
NEXT POST:
This Morning in Metals: Metals Supplies, NLMK and Copper Tracks Back