Metals have suffered considerable volatility this month with prices sliding, then recovering, then sliding again at the end of last week. Metals markets are not alone in this — equities have been on a slide and many are beginning to ask if this is the end of the bull market that has stretched back nearly nine years.
Lower your aluminum spend – Take a free trial of MetalMiner’s Monthly Outlook!
It is a bull market that has seen a convergence of rising commodities prices and rising equities, laying waste to the previous case that investments in commodities is a counter-cyclical move to equities.
A few harbingers of doom have been calling for an end to the equities run for months, if not the last couple of years, caused it has been variously expected by rising interest rates, a collapse in the Chinese property or debt markets, the implosion of the E.U. or another southern European state’s debt crisis – the list goes on.
What finally seems to have spooked the market – and we are not calling an end to the bull run, as this could well prove to be a correction – is inflation.
Reuters reported last week that U.S. job growth surged in January and wages increased further, recording their largest annual gain in more than 8 1/2 years. This has led to expectations that inflation will rise this year as the labor market hits full employment, Reuters reports.
Average hourly earnings have risen to 2.9%, the largest rise since June 2009, from 2.7% in December. The robust U.S. employment report underscored the strong global demand, and raised the fear that with employment low inflation could resurface. The hot labor market will add pressure on the Fed to raise rates faster and earlier than previously anticipated, increasing borrowing costs not just in the U.S. but globally. Rising rates means a stronger dollar, as investment funds flow back into the U.S. to seek higher returns. A stronger dollar also means lower commodity prices – the two invariably move in opposite directions, as we have frequently observed before.
But John Authers, speaking in the Financial Times, refines the argument, saying the selloff came as the market feared massive bets placed on a low level of volatility, on the assumption the status quo would continue through 2018, were undermined by the rate rise scenario, and that those bets will turn into massive losses, not just for the speculators but the banks providing finance behind them. The biggest selloff since 2011 and the second-highest volumes this decade suggest auto trades kicked in as the market fell exiting positons and shorting the market. Authers states the Vix volatility index hit 37.32 on Monday, its highest level since the Chinese currency devaluation of August 2015. That exceeded the levels reached during the Greek debt crisis of 2015 and after the 2016 Brexit referendum.
Nor does he expect volatility to now subside. Markets are twitchy and while there is plenty of liquidity ready to step in and buy on the dip, this will only add to significant swings up and down. 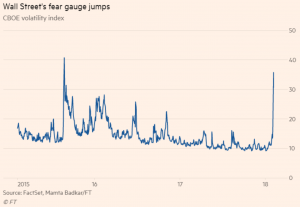 Markets’ next crunch point will the new Fed chairman Jerome Powell’s March rate review to see the degree of hawkishness the market can expect from the new administration.
Meanwhile, commodities in general will experience complex dynamics. A stronger dollar will undermine prices and contributed in part to falls in the price of crude and gold last week, but robust global demand and rising global GDP will be supportive of metals prices, particularly for supply-constrained markets like lead and nickel.
In fact, so tight is the lead market that treatment and refining charges in China are said to have fallen to zero this month as smelters fight to secure supplies.
Want to see an Aluminum Price forecast? Take a free trial!
Volatility, therefore, appears to be the order of the day. Consumers looking to cover positions should look to buy on dips until trends reassert themselves or a new direction becomes clear.